Joe Papp on the spiritual life of the city

I'm in the middle of reading Free For All by Kenneth Turan, a terrific oral history of Joe Papp, the founder of the New York Shakespeare Festival and the Public Theater. 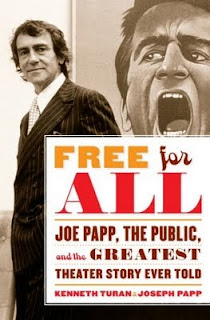 Turan began the project years ago as a collaboration with Papp, who died in 1991, so there are lots of quotes from him and people who knew him well. I'm clearly getting a sense of how stubborn and obnoxious Papp could be at times.

But what also comes through loud and clear is his devotion, almost with a religious fervor, to the idea that the arts, especially theatre, should be available to everyone, accessible to everyone, that they were an integral part of everyday life in New York City.

And he wasn't at all apologetic about it. Although he was prone to hyperbole: "I always used to say that Shakespeare should be as important as garbage collection."

He also said, proudly, that the Public Theater was the only institution of its size in the city that was started from the bottom by a poor boy and worked its way up. "All the other major, established institutions were started by big money."

I love this quote from Papp, which appears on page 237:

"Whenever I used to ask for money, they'd always raise the question: "The city has only $50,000 and there are kids starving to death and you're putting on Shakespeare. What's more important? What would you do?''

"Oh, shut up with that, already," I'd say. "That's a ridiculous question. In the first place, the city has more than $50,000. And, certainly, the city wastes millions and millions of dollars on things that are not important.

"In the general scale of things, certainly it's important to take care of basic necessities, to take care of the ill and the homeless, to feed children. But part of the spiritual life of the city is its art, its plays, so you are creating a false distinction.''
Posted by Esther at 2:00 PM

That quote from Papp (which I haven't gotten to yet in my copy of Free for All) reminds me of Rocco Landesman's attitude about people who insist that the NEA money from the stimulus isn't as important as creating jobs with construction and other projects. Artists are important to America and they have to feed their children and pay their rent like everyone else.

Exactly. And don't forget the behind-the-scenes people, the restaurants and every other business that benefits from the arts. What I like about Joe Papp was that although he could be abrasive, he was absolutely unapologetic about the importance of his work.