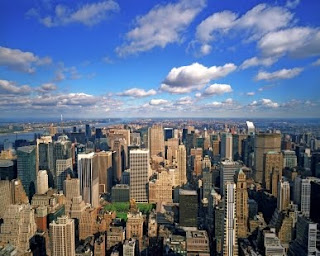 Sadly, my personal best five trips were not enough to stave off a 3.9-percent drop in the number of visitors to New York City in 2009 - about 2 million fewer tourists. I was 5 of 45.3 million. I will just have to try harder in 2010!

But with other cities, like Orlando, suffering bigger losses, New York regained its spot as the most popular tourist destination in the United States. The leisure and hospitality industry, which provides about 10 percent of the city's private-sector jobs, actually grew last year.

Coincidentally, my December credit card bill came a few days ago with the charges from last month's trip. So I tallied my New York City-related expenses for the year. In 25 days spread over eight months I spent $8,803.88. It's not everything - I used some cash, too. The total is probably closer to $10,000. And I don't regret one penny of it!

Among my expenses were five round-trip train tickets. Usually, I go on the Acela Express but a couple of times I took Amtrak's regional service, which is half the price but it can take anywhere from 45 minutes to an hour longer. (There's no way I'm riding a bus for four hours. I don't care how cheap it is.)

I also bought 29 theatre tickets, ranging from $49.50 for Our Town at the Barrow Street Theatre in Greenwich Village to $137 for A Little Night Music on Broadway. I like to sit in the orchestra because a) I want to be close and b) there's more leg room and I have creaky, arthritic knees. I did use Playbill and Broadway Box discounts when possible, though.

I stayed in a hotel for 20 nights that's one area where I've trimmed expenses considerably. I used to stay in a gigantic hotel right in the middle of Times Square but I switched to a smaller, very nice place just down the street. I've saved at least $100 a night, probably more, and it's still convenient for walking back from the theatre. Plus, I get a free continental breakfast!

Speaking of food, I had good meals at, among other restaurants, Pete's Tavern, the Blue Fin, Pigalle, Extra Virgin, Thalia, Cafe Un, Deux, Trois, Chez Josephine, Vynl, Junior's, the Metropolitan Museum of Art cafeteria and the Burger Joint. And don't forget cupcakes from the Magnolia Bakery and Crumbs. (I don't eat much red meat anymore but the beef bourguignon at Pigalle is worth a splurge.)

New York is a great city for exploring on foot and some of my favorite experiences haven't cost me anything: walking through Central Park and across the Brooklyn Bridge, visiting the Museum of Modern Art on a free Friday afternoon, attending a taping of The Late Show with David Letterman, stumbling upon a Paul McCartney concert. (Here's a list of museums with free or pay-what-you-wish hours and other cheap stuff.)
Posted by Esther at 12:03 AM

Good post, Esther. I've regretted a few things in my life, but never a penny spent on travel or books. I'm glad you found something that you really enjoy.

Thanks Kathy! Of course, I agree with you. Sometimes people look a bit disapprovingly when I tell them how much I spend on trips to New York and on theatre tickets. But hey, it's my money and I don't owe anyone anything. I'm not asking for a government bailout!

I'm with Kathy on money spent on travel. I would go without many things if I had to to be able to travel. But I am more than a little envious of your time spent in NYC.

Hey Sandy! New York is there - waiting for your adventure. I agree so much with you and Kathy. When I graduated from college, instead of looking for a job I went to Europe for the summer. When I came back, I was unemployed but at least I had my memories. And I know so many of my classmates who went to work right away. I figured, when do you ever get 12 weeks vacation again?!