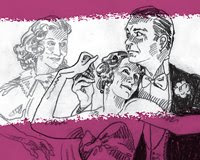 I'm a pretty ardent Anglophile, I loved Upstairs, Downstairs and Gosford Park, so I was looking forward to Trinity Repertory Company's production of Blithe Spirit. It was my first time seeing a Noel Coward play, and I imagined there'd be lots of people who sounded like the royal family, lots of dry British humor. While this production looks and sounds beautiful, I have to admit that the play simply wasn't as funny as I thought it would be.

When I walked into the theatre, the lavishly detailed 1940s set certainly looked like what I'd imagined. Designer James Schuette has done a wonderful job filling the stage with brocaded furniture, leatherbound books, a gramophone in one corner and a crystal chandelier hanging from the ceiling. There's jazzy-sounding music playing and a painting that looks like a Picasso is hanging above the mantle. This is a home that oozes refinement and artistic sensibility.

When the play opens, Charles and Ruth, the upper-class couple whose drawing room we are in, are about to have a dinner party. There's lots of banter between the couple, played by Angela Brazil and Fred Sullivan Jr., including about Charles' late first wife, Elvira. The highlight of the evening will be a seance conducted by the mysterious Madame Arcati. Now, Charles doesn't necessarily believe that you can summon the departed from the spirit world, but he's a novelist and hopes the experience will provide fodder for his new book.

One of the funniest moments in the play comes when their guests, Dr. and Mrs. Bradman, played by William Damkoehler and Cynthia Strickland, arrive. Strickland nearly steals the show. She speaks in a high-pitched, rather snooty sounding voice. And costume designer William Lane has dressed her in a pink evening gown that makes her look, as one review described, "like a frosted cupcake." Wish I'd thought of that line.

Barbara Meek's Madame Arcati has a bohemian look about her, wearing a long, flowery skirt and blouse, lots of jewelry and a scarf around her head. It would be easy to make her appear, well, crazy. But Meek plays her as a woman who truly believes in her ability to summon the departed as she matter-of-factly goes about the preparations for the seance. And sound designer Peter Sasha Hurowitz has come up with some great effects.

At first, the seance doesn't appear to be a success, but lo and behold, Charles' first wife, Elvira, played by a very funny Phyllis Kay, comes in from the garden, through the French doors. She's not in a hurry to leave, either, lounging around the drawing room, making catty comments and doing her best to disrupt Charles' current marriage.

Much of the humor in Blithe Spirit comes from Charles' amazement and horror at seeing his dead wife reappear, realizing that he's the only one who can see and hear her, and trying to figure out a way to get her to return to wherever she came from.

Kay is great as Elivra - she's sexy and flirtatious. And Brazil is a good comic actress. I loved her shocked reaction as a vase that Elvira is holding appears be floating through the air. When Ruth finally realizes that Charles isn't mad, that there really was someone else in the house with them, someone she couldn't see or hear, it's one of the funniest moments in the play.

But despite the usual wonderful performances, the beautiful costumes, detailed set, some great one-liners and a very funny ending filled with terrific special effects, Blithe Spirit left me a little bored at times. The novelty of Elvira being in the house and upsetting everything wore off after awhile. There were times when I just got tired of the talk. A little witty banter goes a long way. Curt Columbus' direction is snappy enough. I don't think it's the production, I think it's the play. Maybe it was just a little too upper crust and well-mannered for me, a little stilted and creaky.

Now, I realize that I'm probably in the minority on this. Everyone else around me seemed to be laughing hysterically and having a great time. Maybe I was worn out from my New York trip the previous weekend or maybe I was feeling a little tired. Maybe I've just gotten used to dialogue that's more biting, less polite. I don't know. It could be that drawing-room comedies simply aren't my cup of tea.
Posted by Esther at 9:05 AM

Esther--
Thanks for the visit and the link in your review. Your conclusion--not the production but the play itself--seems right on. I wonder how TrinRep chooses their plays?

Hi John,
You're welcome and thanks for the comment!

Your "frosted cupcake" description was so perfect! I feel a little bad criticizing Blithe Spirit because everybody from The Wall Street Journal on down loved it. And everyone in the audience I was in seemed to be having a good time. While there were some funny moments, and the ending was great, it just got a little tiresome and felt drawn-out, even at two hours. Maybe after "All the King's Men" and "Richard III," Trinity wanted something lighter, I don't know.

I guess they strive for a balance of drama and comedy, new works and classics. Sometimes they try to do a theme, like home and family or politics and power. I'm looking forward to the next offering, "Paris By Night." It'll be interesting to see how the gay love story goes over. The audiences do tend to skew older, especially when I go, which is usually Sunday afternoons.

Among the shows they're doing next year, I'm really looking forward to "A Raisin in the Sun," and "The Receptionist," which I saw off-Broadway last fall.