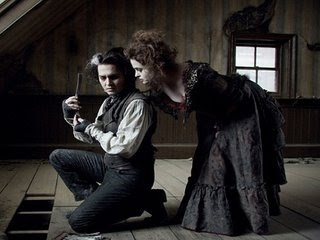 Roxie at Stage Left, House Right and I must have had a Vulcan mind meld last weekend, because we both watched the movie version of Sweeney Todd. Like Roxie, I really enjoyed it, despite having to shield my eyes during the more gory parts.

This was my fourth time with one of my favorite Stephen Sondheim scores. I've watched the stage version, with Angela Lansbury and George Hearn, and the concert version, with Patti LuPone, Hearn and Neil Patrick Harris, on DVD. Last fall, I saw the revival, with actors playing all the instruments, on tour in Boston.

But starting with the computer generated scenes of a dark, sooty, grimy Victorian London, the movie version is by far the creepiest, most horrific, most Dickensian Sweeney Todd I've ever seen. There's no soft-pedaling the violence the way there is on stage, where you can get by with only a hint of blood to show Sweeney dispatching his victims. In the movie, it's very much in your face. I've read that Sondheim's intention was to create a musical in the style of Grand Guignol, macabre horror stories that contain graphic violence. Well, this Sweeney certainly seems close to Sondheim's vision.

Helena Bonham Carter is fine as the demented piemaker Mrs. Lovett. I'm a big fan of Bonham Carter from those exquisite Merchant-Ivory period pieces, with their gorgeous locations and genteel characters, like A Room with a View and Howard's End. But I don't think she holds a candle to Angela Lansbury. I just think Lansbury has a wonderfully comic, daffy take on the role that makes songs like "The Worst Pies in London" and "A Little Priest" so memorable. I have to admit, I did miss the humor. There aren't many laughs in this version of Sweeney Todd.

I thought Johnny Depp brought a terrific sense of slowly boiling rage to his portrayal of the wrongly imprisoned Benjamin Barker, who transforms into the murderous and vengeful Sweeney Todd when he returns to London to find his wife dead and his daughter Johanna a ward of the amoral Judge Turpin. I think the movie kicks the evil up a notch from the stage. The close-ups of Depp make his descent into madness as the demon barber of Fleet Street seem more chilling. He gets more ruthless, his face and clothes bloodier, as the movie goes on.

I was really impressed with the choices director Tim Burton took in casting the supporting roles. I refuse to watch Borat, and I hate all of Sacha Baron Cohen's alter egos, but he was very funny in a small part as rival barber Adolfo Pirelli. Alan Rickman is so slimy as Judge Turpin that I could easily understand the revulsion that Jayne Wisener's Johanna feels after he announces his intention to marry her. Yuck! And Timothy Spall is perfect as the self-important beadle, who acts as Turpin's eyes and ears.

I thought it made perfect sense to have younger actors cast as Anthony, the sailor who falls in love with Johanna, and Tobias Ragg, the urchin Mrs. Lovett takes in. Edward Sanders is sweet and kind of cheeky as Tobias. He was 14 when the movie came out, but seems much younger. He's a little boy who looks like he should be in the cast of Oliver! but without the saccharine sweetness. Yes, 20-year-old Jamie Campbell Bower does have a somewhat androgynous look as Anthony, but I thought he brought an innocence, sweetness and puppylike eagerness to the role. I really believed that he and Johanna could have fallen in love at first sight. Other Anthonys I've seen have just seemed too mature.

My only regret is that because I didn't see Sweeney Todd in a theatre, with a big, bold surround sound, the music didn't seem quite as vital. On screen, there's so much to look at, so many special effects. It occurred to me that you could have had a perfectly good movie without the music. But on stage, from the chorus that narrates "The Ballad of Sweeney Todd" onward, the songs are so integral to telling the story. I can't imagine Sweeney Todd without them.
Posted by Esther at 7:37 PM

You've seen exactly the same selection of Sweeneys I have, as it happens. Except that I saw the tour in Minneapolis (I traveled especially for the purpose. I live in Winnipeg, Canada.)

And, um, hi. I've beenr eading your blog for I guess a few weeks now, after following a link in SOB's blogroll. I thoroughly enjoy it.

Hi Dorian,
Thank-you so much for the kind words. I really appreciate your reading my blog and leaving a comment! I hear Winnipeg is a good theatre city. SOB was there last summer and wrote some posts about what he saw.

Did you enjoy Sweeney on tour? I thought it was really good. It was great to finally hear the score in person. David Hess brought the right touch of madness to Sweeney, and it was fun to watch Judy Kaye prance around on stage with a tuba as Mrs. Lovett. But still, there's something about Angela Lansbury's performance that's so unforgettable. I'm not sure another Mrs. Lovett will ever match that.

Angela was a completely daffy Lovett, and I do have to say that I loved her characterization. But Judy and David were both wonderful.

I think my favourite touring cast member was actually Lauren Molina as Johanna. She's got a beautiful voice, and I liked the franticness she brought to the character. My friend and I met her at the stagedoor afterwards, and she's amazingly nice.

As far as Winnipeg, yes, we've got quite a bit. We've got some great amateur and/or smaller companies, and the Manitoba Theatre Centre tends to make interesting choices with what plays/musicals to present a lot of the time (trivia note: Len Cariou co-founded MTC, being originally from Winnipeg). We've also got some really good festivals (the summer Fringe Festival and FemFest, for women playwrights, and the winter's Master Playwright festival {this year celebrating the works of David Mamet}). So yeah, for a comparatively small city, we're pretty well off.

Hey Roxie,
Isn't it sweet when it happens?! Now, don't tell me what you're planning to watch next weekend, and we'll see if it works again!

Wow, Dorian, there really is a lot going on in Winnipeg! The Mamet festival sounds great. I've never seen any of his work on stage, only in the movies.

And you're right, Lauren Molina is wonderful. I'm so glad you had a chance to meet her and she was so nice. I've written before about how much I love going to the stage door after seeing a show, and the performers are overwhelmingly gracious. It's that personal contact you don't get anywhere else. I bet meeting her was the perfect ending to a perfect theatrical experience!