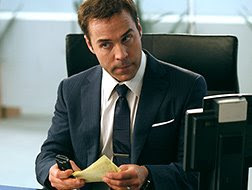 Those are three well-known actors who have, are currently or will soon appear in David Mamet's caustic, satirical look at the movie business, Speed-the-Plow. Mantegna created the role of Hollywood producer Bobby Gould on Broadway, Spacey is enjoying raves in the role of fellow producer Charlie Fox in London, and apparently, Piven will make his Broadway debut as Gould in a revival this fall.

I was holding out hope that Spacey's production, which also features Jeff Goldblum as Gould and Laura Michelle Kelly as Gould's secretary, Karen, would transfer from London's Old Vic Theatre to Broadway. But according to The New York Times, another version has won out, and will feature Piven. The Times article says that the play will be directed by Neil Pepe of the Atlantic Theater Company, which Mamet helped start. The producers, the same team behind the 2005 Tony-winning revival of Mamet's Glengarry Glen Ross, are aiming for an Oct. 23 opening.

While I'm disappointed I won't get to see Kevin again, I'm looking forward to seeing Piven on stage. He's so wonderfully obnoxious, ruthless and insensitive as Hollywood super-agent Ari Gold in HBO's Entourage. Playing a Hollywood producer probably won't be a big stretch for him. My only concern is, a little bit of Ari goes a long way and I can easily see Piven being too over-the-top. But he comes from a theatre background - his parents founded the noted Piven Theatre Workshop in Evanston, Ill. According to a story in Variety, Piven was last seen in New York in a 2004 off-Broadway production of Neil LaBute's Fat Pig.

This will be the first Broadway revival for the six-hander. (Ok, I know you'd normally call it a three-hander, because there are three people in the cast, but each person has two hands, right? So doesn't a six-hander make more sense?) It opened on April 9, 1988, with Madonna as Karen, Mantegna, (a Mamet regular, and an actor I really like) and Ron Silver as Charlie Fox, and closed on Dec. 31, 1988, after 279 performances. In his review for the Times, Frank Rich called Speed-the-Plow "by turns hilarious and chilling," and said that Mamet created "riveting theatre."

I've never seen a Mamet play on stage, and I like the idea of a witty, acerbic, inside look at the business of making movies. And I'd really like to see Piven on stage, albeit in a role that's pretty close to the one he plays on Entourage. Even though Kevin Spacey won't be in this one, I'm putting Speed-the-Plow on my Broadway wish list.
Posted by Esther at 1:09 AM

Ha, I just read that on Playbill too and was excited until I realized, wait. that means Kevin Spacey isn't in it then if Piven does the role. Oh damn! Still, I'm excited too! though sometimes I wonder from the talk and rumours whether Piven does his role on Entourage TOO well... you know?

Even if Spacey isn't there, I'll be there...

"Entourage" is a favorite show of mine. And Piven as Ari is a marvel. I think he should be able to provide a sizably respectable stage performance.

Yeah, I know what you mean Vance. Maybe Piven has internalized Ari a little bit! I know someone who saw the show in London and she said Kevin was terrific. Although I guess it's also a role he's played before, in "Swimming with Sharks."

I was reassured when I saw that Piven had been in an off-Broadway play. He does have some theatre training and experience, so I'm sure he'll be fine. And I still get excited about the prospect of seeing a favorite actor on stage! It seems like practically every week there's an announcement of a favorite of mine coming to Broadway. The only one I'm not terribly excited about is Daniel Radcliffe in "Equus." If I had a chance, I'd go, but I've never been a huge fan of his from the Harry Potter movies. I'm much more excited about the prospect of seeing Jeremy Piven!

Just to let you know, Kevin's role as Charlie Fox in this is nothing like the Buddy Ackerman role he played in Swimming With Sharks. When you see the Broadway production, you'll understand. :)

Thanks anonymous, on two counts! I thought that Kevin was playing the Bobby Gould role, but I've corrected my error.