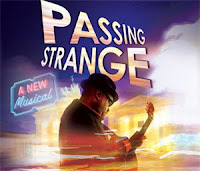 Usually, I have to wait until a show starts to get a chuckle out of it, but Passing Strange made me smile before I even entered Broadway's Belasco Theatre. Outside, there's a picture of the cast with this quote from Stew, whose semi-autobiographical story I was about to see played out on stage: "Life is a movie starring you. Your whole family is the cast and crew."

That line is funny, playful and brimming with insight - and that's what I loved about Passing Strange. The dialogue is smart, witty and memorable. In fact, I think the last show I saw with so much memorable dialogue was probably the newly minted Pulitzer winner for best drama, Tracy Letts' August: Osage County.

Passing Strange is a minimalist musical - it doesn't have much in the way of lavish sets or big production numbers and the cast doubles up on roles. But it's got terrific performances, an incredibly appealing main character and very big ideas about race and identity and family and what it takes to create meaningful art.

Stew, who wrote the music with his partner Heidi Rodewald, narrates the story accompanied by his rock 'n' roll band. I love David Korins' scenic design that has Stew's band partially submerged into the stage. And the way Stew uses music to tell stories reminded me a little of another singer-songwriter I love - Bob Dylan. (I downloaded some of the songs from the Passing Strange Web site, but until I saw them in the show, I didn't really know what they were about).

Stew, born Mark Stewart, is an easygoing kind of guy. Reviewers usually describe him as "roly-poly" and note the thick black glasses perched on his head. He doesn't at all mind engaging with the audience when a theatergoer who's a little too caught up in the moment shouts to him from the balcony.

A character known only as Youth, an amazing Daniel Breaker, and the rest of the equally talented cast act out scenes from his life. First, we see him in 1970s Los Angeles, a middle-class black teenager rebelling against his loving but strict churchgoing mother, played by Eisa Davis. After that, he embarks on sojourns to hedonistic Amsterdam ("a place that makes Berkeley look like the Bible Belt") and radical Berlin, all in search of "the real."

One thing that's really struck me about all the theatre that I've seen during the past year is how many of the stories revolve around the relationship between parents and children. Obviously, there's lots of drama - and comedy and music - to mine in that relationship. Plus, it's pretty universal. We've all had parents - and our parents have all had children.

Colman Domingo, Chad Goodridge, Rebecca Naomi Jones and De'Adre Aziza are wonderful playing the very different characters Youth meets at different points in his journey. I hope there are many more Broadway roles for all of them. I especially liked Domingo as the church choir director/Berlin performance artist and Goodridge as a drummer in Youth's teenage punk rock band who, after two years, laments that he still hasn't found a sense of rhythm. He's equally adept later, as a left-wing German militant.

It's clear that Youth is a stand-in for Stew: they're dressed alike in red shirts, black pants and black sneakers. And I can't say enough about Breaker. He's energetic and he does so much without even talking as he moves from sheltered teen to wide-eyed world traveler. Just the expressions on his face and the way he slouches in a chair convey so much meaning. At one point, after Stew explains how Passing Strange isn't going to be like a traditional Broadway musical, Breaker leaps across the stage in imitation of a big Broadway dance number. It's so unexpected, hilarious and graceful, and I think it's one of the most delightful moments I've seen on stage - or in the movies or on television for that matter.

In fact, Breaker makes Youth so sweet and likable I couldn't quite square it with the way he treats his mother. In the end his actions, or inactions, make him come across as kind of selfish. But I guess Stew's point is that we all do foolish things when we're young, things that we regret as we grow older, when it's too late to make amends.

I also like the way Passing Strange offers a nod to an earlier generation of African-American expatriate artists, people like James Baldwin and Josephine Baker. It connects Youth's journey to a larger tradition.

I saw Passing Strange and In the Heights on successive nights, and one of the things I appreciated about both of them is that each allows African-American and Latino characters to tell their own stories. Like Mandy Gonzalez' Nina, the young Latina college student whose story is at the heart of In the Heights, Youth is trying to find his place in the world. And Stew reminds us that the world's not always a very accommodating place for a young black man, even one as endearing as Youth.

At one point, the teenage Youth is told that on the one hand, he's "not black enough" but on the other hand, he shouldn't be so black that no one will hire him. He flinches at being stereotyped, but in Berlin he becomes a stereotypical ghetto kid and hip-hop artist. He's delighted and touched to be accepted and trusted by a young woman he meets in Amsterdam. (And it's the subject of "Keys," a beautiful song from Breaker and Aziza.) Yet later he learns, painfully, that there are limits to his acceptance, even by people who appear to be his friends.

In the end, I have some mixed feelings about Passing Strange. My immediate reaction was, well that was different. I liked it and I'm glad I saw it and I'm looking forward to listening to the Broadway cast CD, but I didn't feel compelled to see the show again. For one thing, parts of it are pretty loud. Sometimes I had trouble understanding some of the lyrics. And I thought the second act dragged a bit. (Although Stew's jabs at radical politics in Berlin are priceless. One artist tells Youth: "My pornography is men in business suits making deals.")

Call me shallow, but I guess I did miss the big choreographed dance numbers, showstopping songs and lavish sets. Still, it would be pretty boring if every musical were like that. I'm glad that there's something so unique on Broadway and I love seeing a show that challenges my expectations. And I was pretty captivated by Breaker's performance. Plus, Passing Strange does give you an awful lot to think about afterward. Ok, I'm wavering a little. Maybe I would see it a second time, if only to ponder Stew's words and delight again in Youth's fleet-footed leap across the stage.

Before I saw Passing Strange, I listened to an interview with Stew on the public radio program Studio 360. He talked about some of his inspirations, most notably The Wizard of Oz. That's one reason, he said, why he has African-American actors play the white characters Youth meets in Amsterdam and Berlin.

At first, I wasn't sure whether it worked. I thought maybe the contrast would have been greater if white actors had played those roles. Youth would have seemed even more like a stranger in a strange land. But as I started to think more about the whole Wizard of Oz comparison, I realized that I like what Stew's done. It's actually pretty inspired.

For all of its nontraditional look and storytelling, Youth does go on a pretty traditional journey of self-discovery. It's very Dorothy-like. Kevin Adams' design moves the show from subdued, dim lighting to brilliant color, just like the Wizard of Oz. Youth argues with his mother, just like Dorothy fights with Auntie Em. And he sees some of the same people who were in his life in the first part of the musical playing different roles in his life in the second part, just like The Wizard of Oz.

Youth struggles as a musician because he doesn't yet realize that you have to write about what you know - your life experiences, what excites you, the things you feel passionate about. Then the writing comes easy, because it comes from the heart. That's what's "real." And his epiphany, well, you've seen The Wizard of Oz, so I know you can figure it out. If you need a hint, just close your eyes and click your heels together three times. It'll come to you. I know it will.
Posted by Esther at 12:32 AM