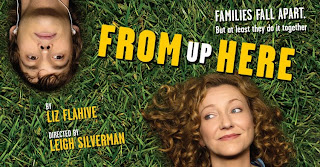 I was interested in From Up Here mostly because of Julie White. I didn't see her Tony-winning performance in The Little Dog Laughed, but I did watch her Tony acceptance speech, and it was hilarious. She just seemed like such a character. I thought, that's a woman I want to see on stage.

In Liz Flahive's play, being produced at City Center by the Manhattan Theatre Club, White plays Grace, a stressed out wife and mother on her second marriage. She's going through a rough patch with her husband, Daniel (Brian Hutchison). She's got her hands full with two teenagers, Lauren (Aya Cash) and Kenny (Tobias Segal). And her world traveler sister Caroline (Arija Bareikis) has just popped in for a visit.

The major drama in the play comes from something horrendous Kenny has done, an act for which he has to apologize before his entire high school. It's never quite spelled what he did, but Flahive strongly hints that it involved bringing a gun to school. Kenny's understandably being watched very closely by everyone and he's under a long list of restrictions about where he can go and what he can do. He's pretty much become a pariah.

The actors who played the teenagers were all good at playing stubborn, mopey, perky, dorky, uncommunicative kids. I especially loved Will Rogers as Charlie, a somewhat goofy classmate who wants to take Lauren to a high school dance, and Jenni Barber as Kate, an overachiever who befriends Kenny as kind of a personal challenge, but who may not be as altruistic as she appears.

White was very funny in a role that requires her to be pretty over-the-top at times. She seems like a woman on the verge of a nervous breakdown, trying to hold her family together at a time of incredible strain. Everyone needs something from her, but her needs, of course, aren't being met at all.

My biggest problem with From Up Here, is that in the end, I felt a little bewildered and teased. Flahive brings up a very serious subject, school violence, and uses it as a device to explore its effect on a family. But she leaves out some essential details. I expected to find out what Kenny did and why. While Segal does a good job as the troubled teenager, giving us some sense of the anger that led to his outburst, the details remain maddeningly vague.

Ok, maybe Kenny's motivations were fuzzy. That's understandable. But why couldn't Flahive have simply come right out and told us what happened? It seems to me that if the play is supposed to be about everyone's reaction to this incident, then we need a clearer idea of what the incident was and how serious it was. I felt like I could have empathized more if I understood what happened.

Also, if Kenny really did bring a gun to school and use it, I simply don't believe there's any way he'd be allowed back, not even with the most stringent of restrictions. I don't think an apology to the entire school would have done it.

While there are some good performances in From Up Here, and I'm glad I had a chance to see Julie White, the play ultimately wasn't as deep or thought-provoking as I expected. I knew it was a dark comedy, so I expected some laughs. But it's about an incident that should have turned a family upside down and shaken everyone to their core. Or maybe not. I just don't know.
Posted by Esther at 12:28 AM