A medal for Chita Rivera

Congratulations to two-time Tony winner Chita Rivera, among this year's 16 recipients of the Presidential Medal of Freedom, our nation's highest civilian honor.

The award will be bestowed today at the White House by President Obama and you can watch the ceremony beginning at 3 p.m. at www.whitehouse.gov/live. 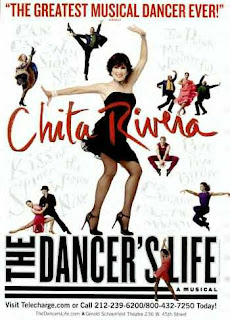 And what a great homecoming for the 76-year-old Washington, D.C., native, born Dolores Conchita Figueroa del Rivero. Here is what she said when the award was announced:

"When my mother was a child, she rolled Easter eggs on the lawn of the White House. And now, to receive The Medal of Freedom from our President, is truly a dream. I am deeply honored to receive this award and to be in such distinguished company. I only wish my parents were here to share it with...but they are!"

This year's recipients were chosen for being "agents of change," people who have blazed trails and broken down barriers.

Among her accomplishments, Rivera was the first Hispanic woman to receive a Kennedy Center honor. And coincidentally, also visiting the White House today is another Latina groundbreaker: there's a reception this morning for newly sworn-in Supreme Court Justice Sonia Sotomayor. How fitting!

I've written before about how fortunate I was to see Ms. Rivera in the national tour of Chita Rivera: The Dancer's Life. That was in May 2007, when I was just starting to become a regular theatergoer. I knew who she was but I can't say that I knew a lot about her. And I never would have gone without a nudge from a wise friend.

I remember writing to my new e-mail pal Steve on Broadway and running down the list of everyone who was coming to the Providence Performing Arts Center that spring. He told me that if I wanted to see a true Broadway legend, I should make every effort to see Chita Rivera. So of course, I did. And of course, he was right.

What a terrific storyteller as well as a terrific singer and dancer! It was great to hear her talk about how she got her start, about working on shows like West Side Story and Chicago. I wish I could go back and see her again.

Update: Here are the White House comments on all of the Medal of Freedom recipients. The president used the words "sassy" and "electric" to describe Rivera, and I liked this quip: "Dolores Conchita Figueroa del Rivero knows that adversity comes with a difficult name."
Posted by Esther at 10:00 AM