Drawing the curtain on my theatre season 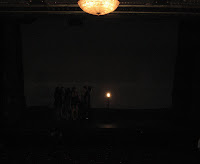 Barring some miracle, my 2008-2009 New York City theatergoing season is complete. It was a great year as always - I saw so many terrific performances and the plays especially were great - so much absorbing and inventive storytelling.

Now it's time for some end-of-the-season thoughts.

1.) Be flexible. In January, the plays that make up Alan Ayckbourn's trilogy The Norman Conquests weren't even on the list of shows I planned to see, yet they turned out to be one of the best theatre experiences I've ever had. I've never laughed so hard, so consistently. While each of the six actors created a memorable character, in my opinion Stephen Mangan as Norman gave a performance for the ages.

2.) Go off-Broadway more. Every season it seems like there are a few Broadway shows I could have missed and a few off-Broadway I wish I'd seen. Two of the best plays I saw were Black Watch at St. Ann's Warehouse in Brooklyn, and Our Town at the Barrow Street Theatre in Greenwich Village. And I'm kicking myself that I probably won't make to Ruined.

3.) Luck was with me. Broadway actors are a pretty dedicated bunch but I know sometimes people get sick, go on vacation, etc. West Side Story was apparently hit with a rash of understudies earlier this summer. So I'd like to mention that practically every performer I wanted to see when I bought my ticket was in the show the day I saw it - even some who left soon afterward.

4.) The list grows shorter. I crossed seven more theatres off my list this season, including the adorable 597-seat Helen Hayes, which is so tiny I wish I could have packed it up, put it in my suitcase and taken it home with me! I've now been in 29 of the 40 Broadway theatres - not bad when you consider that in April 2007, I hadn't been to a single one. By the end of the year, I could be down to the single digits.

5.) I saw the light. I exited the Palace after seeing West Side Story and then realized the stage door was on the other side of the building, so I walked back through the theatre. To my surprise, the ghost light had already been put out on stage. I was thrilled! I'd read about that particular theatrical tradition but never seen one. A little thing, but it was cool.

6.) TKTS prices. I used the reduced-price ticket booth in Times Square twice this year but it's not always a great bargain. At about 20 minutes before curtain time on a recent Sunday, TKTS wanted $91 for a partial-view seat at Hair. I couldn't believe it. Sorry, but as much as I wanted to see Hair a second time, that's way too much money for not being able to see the entire stage.

7.) Where's the VIP? My ticket for Our Town cost $49.50, before fees. If I'd wanted to splurge, I could have spent double that amount - and I would have been upset once I saw the size of the theatre. Barrow Street, really, how in good conscience can you charge $95 for "VIP premium" seats in a theatre that's smaller than some living rooms? And where are the premium seats anyway - in David Cromer's lap?

8.) Color me disappointed. I don't buy a lot of souvenirs when I go to New York, but I do keep all of my Playbills. Now I realize when I see shows that have been open for awhile, I'm not going to get one with a nice color cover. But if you're switching to black and white, at least make it decent. I was shocked at how washed-out my black and white 9 to 5 Playbill looked.
Posted by Esther at 10:50 AM

Great recap. You have really made a lot of "progress" on your theater viewing in 2 years. Good for you. I had never heard of a ghost light before. I learned something new today. Thanks. You always have so much information in your posts.

I am totally with you on the colorless Playbills. You know, if they can include full-color ads on the back of the program, don't paying audiences who see a show a little later in the run deserve to have the same Playbill as those fortunate to get there early?

Thanks, Pam! I was just excited to actually see a ghost light after reading about them!

Well where else could the premium seats at the Barrow Street Theatre possibly be?! I couldn't figure it out. Unless it's the seats that ring the two tables in the middle. But I thought those were "on stage" seating. Maybe they're doing something completely different and charging more money the further away you are!

Thanks, Steve! Some shows, including Next to Normal and West Side Story, still have color Playbills. And it's so much nicer, especially for someone who keeps them all.

You're absolutely right, if there's a full-color ad on the back, why can't the front be color, too? I would love to see a cost comparison.

Plus, producers should consider it a marketing tool - you go home and talk about the play or musical to your your friends and family, show them your Playbill, you want them to have a good first impression.