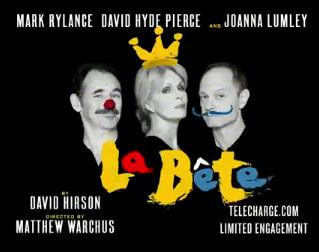 La Bete, at the Music Box Theatre on Broadway
Gratuitous Violins rating: **** out of ****

I was a little wary going into the revival of La Bete, knowing the work, which first appeared on Broadway in 1991, was written in rhyming couplets and set in 17th-century France. I was afraid it might be hard to follow or seem a little musty.

Well, I'm happy to report that I was enthralled for the entire 1 hour and 45 minutes. The performances were wonderful and I loved David Hirson's play, which is funny, thought-provoking and entirely accessible.

Without being preachy, La Bete raises questions about artistic integrity, the debasement of culture, even the fickle nature of arts funding, that resonate today. And it does so while maintaining a terrific sense of humor.

A highbrow theatre troupe, under the patronage of a princess, is forced to accept a lowbrow street performer into the company. It's a situation Hirson uses to explore just how far we're willing to go in order to be entertained.

The rhyming dialogue, witty and clever, was delivered so naturally that I got into the rhythm of it immediately. And a couple of times I even guessed the word that was coming next - which was kind of fun.

Under a lesser creative team, I can see where this might not work as well. But director Matthew Warchus has a trio of superb comedic actors - Mark Rylance, David Hyde Pierce and making her Broadway debut, Joanna Lumley of Absolutely Fabulous.

Rylance is brilliant as the buffoonish, outrageous Valere. He delivers a 20-minute monologue in which, among other things, he's insulting, vulgar, childlike, apologetic and full of himself without seeming to realize it. What an amazing clown - and I mean that in the highest sense.

Hyde Pierce, as the principled - and perhaps a bit stubborn - playwright Elomire, is repulsed by Valere. His facial expressions, his body language, the props he uses all convey increasing disbelief and exasperation, while hardly getting a word in edgewise.

Lumley, wonderfully regal, enters in a shower of golden confetti. She's infatuated with Valere, her newest discovery, and demands that he join the troupe or they will lose her patronage. As for Elomire, his work has become tiresome and doesn't amuse her so much anymore.

With gorgeous period costumes and a massive book-lined study of a set, both designed by Mark Thompson, you can tell that this is a very comfortable company of actors, happily settled on a grand estate. They've got a lot to lose.

Stephen Ouimette, from Slings and Arrows, provides a voice of reason as Bejart, Elomire's assistant. He reminds him of what it was like before, when they were sleeping in haylofts, traveling from town to town. "Life is compromise! We learn to live with that which we despise."

The strength of this production is that while I was laughing so hard, it gave me so much to think about. In the end, here's what it comes down to for me:

Would it really hurt to give in to the person who controls the purse strings? It's not so terrible to simply give the audience what it wants once in awhile. Don't we all enjoy a bit of light entertainment? As awful as Rylance makes Valere, you can't take your eyes off of him.

In our desire to laugh or be shocked or frightened, isn't there a point at which we go too far? (Think about Network or those Jackass movies.) The impassioned Elomire, offended at being asked to lower his standards, warns, "We're measured by the choices that we make."

I'm so disappointed that La Bete is closing on Jan. 9, a month ahead of schedule. I wish more theatergoers had given it a chance. This is a play that will stay with me for a very long time.
Posted by Esther at 9:00 AM

damn it, I've got to get this show

La Bete and Brief Encounter were definitely my favorites of the six shows I saw. I don't know, a lot of the reviews seemed to like the performances more than the play but I loved them both. I'm happy to be in the minority on this one! I even met the playwright, David Hirson, at the stage door and got to tell him how much I enjoyed it.