WAR IS PEACE
FREEDOM IS SLAVERY
IGNORANCE IS STRENGTH

Those quotes are from George Orwell's 1984 and apparently, they're a source of inspiration for a Minnesota state representative.

The Minnesota House has voted to put on the ballot in 2012 a constitutional amendment defining marriage as between a man and a woman.

While gay marriage is already illegal in the state, apparently there's a fear that pesky judges or lawmakers might try to overturn the ban. So Minnesota needs an extra layer of "protection." 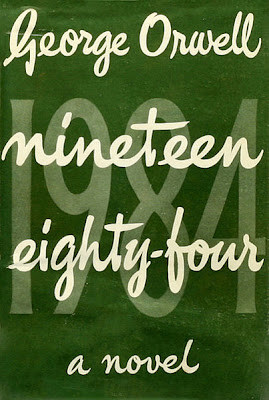 (Either that, or someone is hoping for a big turnout of conservative Republicans for the 2012 election. Nah, politicians couldn't be that cynical, could they? I mean, they wouldn't try to whip up irrational fear and hatred of a minority group just for votes, would they?)

I could not believe this quote from Rep. Steve Gottwalt, a St. Cloud Republican and the bill's sponsor:

Well, you can frame it any way you want but that is exactly what the proposed amendment is about. Even if it's not what you intended, the measure will enshrine in the state Constitution discrimination against decent, hard-working, law-abiding, tax-paying Minnesota citizens who happen to be gay or lesbian.

Saying it's not about hatred or discrimination or intolerance doesn't make it so.

Don't take my word for it. Here are the more eloquent words of Republican Rep. John Kriesel, a veteran who lost his legs in the Iraq war:

"This amendment doesn't represent what I went to fight for. This doesn't represent that. Hear that out there?" he said, referring to the hundreds of protesters in the hallways of the Capitol, "That's the America I fought for, and I'm proud of that."

Why would a gay couple care what a government body said about their union? If the gay couple says their married, that should be good enough for their beliefs right. I got married through my church and didn't think twice about what the government said.

To me, the issue isn't simply caring about what the government says, it's the rights and status afforded by a legally recognized marriage.

For example, being able to file a joint income tax return or, if your employer doesn't offer domestic partner benefits, being able to add your same-sex spouse to your health insurance.

It's also about going to the hospital and being able to say, that's my spouse in the emergency room, I want to be with him or her, and not have anyone question it because you're not legally married.

The fact is, heterosexual couples don't have to think about what the government says because they already have those rights. I believe gay and lesbian couples, who are law-abiding, tax-paying citizens, should have the same rights.

By the way, if you'd like to learn more, here's a link to some questions and answers about same-sex marriage prepared by the Human Rights Campaign.