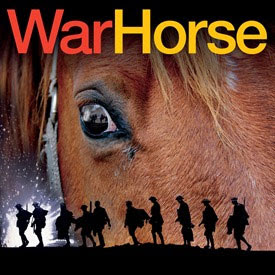 I've been looking forward to War Horse for about two years, ever since I saw a video of the original production from Britain's National Theatre, with its stunningly lifelike horse puppets.

In some ways, the show lived up to my expectations - the horses are amazing. The story, unfortunately, pulled up a bit lame. Still, as theatre War Horse gets high marks from me for sheer inventiveness.

The play is adapted from a children's novel by British author Michael Morpurgo. It takes place in an English village just before World War I and then moves to the battlefields of France as war breaks out.
The story is pretty straightforward. Teenage Albert Narracott, played by an earnest and appealing Seth Numrich, has a horse named Joey that he's raised from a foal. When the war begins, his alcoholic, wastrel father (Boris McGiver) sells Joey to an Army officer. A heartbroken Albert enlists to search for him.

Without any elaborate sets, War Horse manages to evoke a time that now is nearly a century in the past. I loved the lyrical folk music from Adrian Sutton and John Tams and the projection design by 59 Productions - drawings of the English and French countryside that looked like they were torn from a sketchpad.
I also thought War Horse was very effective in showing how World War I became a watershed in the sad history of human conflict. We know what the characters don't realize - that soldiers on horseback will be no match for the tanks and other weaponry of modern warfare.

Where I thought the story got bogged down was in Act II. Joey is captured by a German officer, played by Peter Hermann, who ends up befriending a young French girl and her mother. That part struck me as overly cloying. Morpurgo has said that he wanted wanted to show the suffering on all sides but I thought it pushed Albert off to the side for too long.

The stars of War Horse, though, are the horses, created by South Africa's Handspring Puppet Company. I'm so thrilled that Handspring's Adrian Kohler and Basil Jones, partners in business and in life, are getting a special Tony Award next month. Their work doesn't easily fit into any category and it's so deserving of recognition.
Each of the two main horses, Joey and Topthorn, requires two actors inside and a third who walks alongside to maneuver the head. Somehow the combination of wood and leather and metal comes together in a way that's truly magical. They seem alive.

(I have to give a shoutout to one of the puppeteers. Jude Sandy is a Brown/Trinity Rep MFA graduate who I saw in A Raisin in the Sun. He's the first Trinity Rep actor I've seen on Broadway. He's also a dancer and I can see where that training would be invaluable for the intricate equine choreography.)
I know some critics felt that War Horse was manipulative but I think all art is designed to manipulate our emotions in some way - you don't want to look at it and feel absolutely nothing. What would be the point? The question is, are you absorbed by the story. And I was.

I'll admit that I got a little teary at the ending but where I really felt emotional was the curtain call, when Joey and Topthorn, their manes flying, took one last magnificent gallop around the stage.
Posted by Esther at 10:30 AM

I'm okay with being manipulated for a good cause. I was very curious about the show and tried to get tickets for it in London but couldn't. It sounds like it'd be right up my alley though.

The big ticket here now is The National Ballet of Canada's production of Alice in Wonderland. I've heard it's stunning, inventive and has a tap dancing Mad Hatter. I may try and see that. I'm starved for theatre of any kind now that opera season has finished!

I was reading that War Horse is coming to Toronto so I'll be able to compare notes! Also, I got my tickets for Alice in Wonderland for June 25 so now I have something to look forward to. Ah.