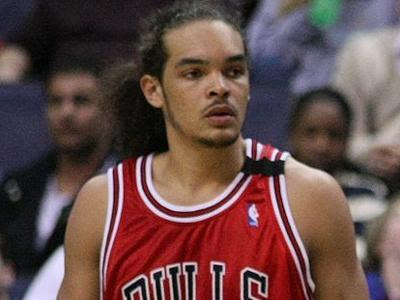 I wasn't going to write about Chicago Bulls center Joakim Noah - another pampered, overpaid athlete shows his bigotry in public. But when I saw a video of the antigay slur he uttered during Sunday's playoff game, I was so disturbed by it.

Noah, sitting on the bench after his second foul, was angry about something a fan said to him. The intensity of his reaction was hate-filled and frightening. Clearly, he wanted to hurl the absolute worst, most hurtful insult he could think of at that moment. And what came to mind: a vile epithet about gay people.

Now, Joakim Noah isn't some stereotypical poor kid from the 'hood who never learned the proper way to treat people. His father is Yannick Noah, the French tennis player of Cameroonian descent, and his mother, Cecilia Rodhe, is an artist and a former Miss Sweden.

Noah has since apologized and he's been fined $50,000 by the NBA. (It would be great if the money went to a group like the Trevor Project, which works to prevent suicide among LGBT youth.)

But the problem is not just what Noah said in the heat of the moment. Unfortunately too many kids, no matter what their background, grow up believing that the word he used is the worst thing you can call someone. You use it because you know it stings.

And honestly, why wouldn't they get that message when the larger society - including elected officials - go out of their way to devalue the lives and relationships of gay people? Here are just two of the most recent examples:

On Sunday, I wrote about a vote by the Minnesota legislature that will place on the ballot in 2012 a constitutional amendment defining marriage as between a man and a woman.

In Tennessee, the state Senate has approved a bill forbidding the mention of anything but "natural human reproduction science" in kindergarten through eighth grade. (It's been dubbed the "Don't say gay" bill.)

What's particularly cruel about both of these measures is that Minnesota already bans gay marriage and in Tennessee, the family life curriculum doesn't even cover homosexuality. They're examples of pure vindictiveness.

So if you're a gay kid in Tennessee, what are you supposed to think when adults believe that your classmates need to be protected from you, that what you are can't even be mentioned by name? And if you're a straight kid, what message do you think that sends about your gay classmates?

Of course none of this is an excuse for outbursts like Noah's. In addition to being bigoted it was unprofessional -- no matter what the fan said to him. But an apology and a $50,000 fine don't even begin to get at the root of the problem.

In an interview with an ESPN reporter, Noah, 26, said the slur doesn't represent who he is. Now, he has a chance to prove it.
Posted by Esther at 9:30 PM