As much as it pains me to say this, Jez Butterworth's Jerusalem made me want to turn in my Anglophile card. Yes, it's funny and Mark Rylance is brilliant in the leading role but what was the point?

Now, I knew this play was very British so I did some research. I read the poem by William Blake, with its reference to England's "green and pleasant land," as well as its "dark Satanic mills." I learned that the hymn "Jerusalem" serves as an alternative national anthem. I found an article that explained the slang.

All of that helped but Jerusalem, about a disreputable Pied Piper-like character who supplies the local teens with drugs and alcohol, went on and on. I laughed a lot but it felt like a long three hours. 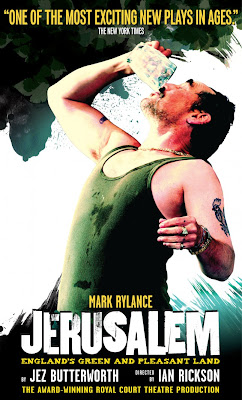 Rylance, terrific last fall as a buffoonish playwright in La Bete, certainly knows how to immerse himself in a role. His Johnny "Rooster" Byron is ridiculous and riveting. A former daredevil motorcyclist, he lives in an old Airstream trailer parked in the woods in rural Wiltshire.

I loved the set design, by Ultz, which featured real trees, as well as a turtle and goldfish. (I've read there were chickens but I must have missed them.) Ultz also did the costumes, dressing Rylance in an impressive variety of headgear.

Giving the establishment the middle finger and spinning increasingly tall tales, Rooster's kind of a local legend to the kids, who regard him with a mixture of awe and amusement. (My favorite scene involves Rooster's impressive talent at Trivial Pursuit.)

The establishment, of course, views Rooster as a wart to be surgically removed. The local council wants to evict him and his trailer because they're standing in the way of a new housing development. Parents are angered by the sway he holds over their children, the extent of which becomes more apparent and more sinister as the play goes on.

All of this takes place on the festival of St. George's Day. According to legend St. George, the patron saint of England, slayed a dragon, rescued a princess and in doing so, converted a grateful citizenry from paganism to Christianity.

Clearly there's a lot of history, geography and religious and literary references here that escaped me. In one sense, it didn't matter. You don't need to be British to recognize Rooster's type.

The problem is, I wasn't sure what Butterworth meant Rooster to represent. I know he's trying to make a big point about England today, but what exactly?

Is Rooster a symbol of uncouth modern England - despoiling this "green and pleasant land" and standing in the way of building a new Jerusalem? Or, is he the authentic Englishman, rooted in history, that soulless modern Britain is wrongly trying to stamp out?

I think Butterworth is using "Jerusalem" ironically. England is far from a shining city on a hill, a point the play makes abundantly clear in a terrific opening scene, featuring a sprite-like Aimee-Ffion Edwards attempting to sing the title hymn.

I enjoyed the supporting cast - it was fun to see Mackenzie Crook (from the original British version of The Office) and John Gallagher Jr. as two of the teens drawn to Rooster. I'm a big fan of Gallagher from Spring Awakening although his British accent didn't sound wholly successful.

But after awhile, I thought the hangers-on became tiresome. I don't know, a bunch of people sitting around in the woods drinking and using drugs are just not very interesting. Or maybe they simply paled in comparison with the larger-than-life nature of Rylance's character.

Eventually, Jerusalem takes a darker, more serious turn. It gets a bit brutal and as I've said before, I'm extremely squeamish. There are surprises involving Rooster. I thought some of them were more believable than others. In the end, I wasn't sure whether I was supposed to root for Rooster or revile him.

I've been to three-hour plays that have flown by, that have held my interest all the way. This was just not one of them. I didn't find much wit or insight in Butterworth's language, except for one speech at the end. (OK, maybe there is wit and insight that you have to be British to pick up on.)

I think Jerusalem could have made its point more clearly and in a lot less time. Or perhaps it's me. The reviews have been pretty rapturous. Maybe American drama simply speaks to me more.
Posted by Esther at 11:45 AM