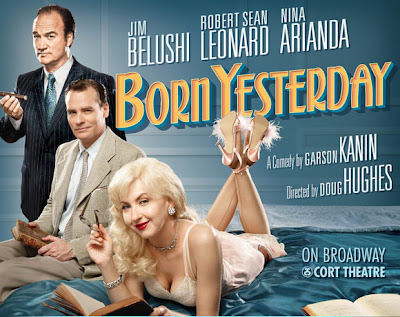 I saw Born Yesterday during its final weekend on Broadway but for posterity's sake, I figured I'd post a review anyway.

Garson Kanin's 1946 play is best known as a film, which I've never seen. Still, it came with a great pedigree. Kanin and his wife Ruth Gordon wrote screenplays for two of the most famous Spencer Tracy/Katharine Hepburn romantic comedies - Pat and Mike and Adam's Rib.

In Born Yesterday, a shady junk dealer named Harry Brock, played by Jim Belushi, comes to Washington looking to bribe a senator so he can corner the market on scrap metal in war-ravaged Europe. Accompanying him is Billie Dawn, a former showgirl who's sweet but not too bright, played by Nina Arianda.

Harry realizes that Billie could use a little refinement if they're going to move in the right social circles in Washington. He hires a young magazine writer who's been interviewing him, Paul Verrall, played by Robert Sean Leonard, to tutor her and make her more presentable.

For me, the main attraction in Born Yesterday was a chance to see Arianda, who has been getting heaps of praise since she appeared off-Broadway in Venus in Fur in 2010. (She'll reprise the role on Broadway in the fall.)

Well, she was stunning, looking absolutely gorgeous in Catherine Zuber's costumes. With her high-pitched voice, platinum blond hair and great timing, I felt like I was seeing the reincarnation of a 1940s screwball comedy actress onstage. She just totally inhabited Billie. It was a unique and memorable performance.

(I also have to give a shout-out to John Lee Beatty's terrific set design, a stylish and luxurious hotel penthouse with a view of the Capitol, done up brilliantly in royal blue and white.)

The rest of the cast was kind of a mixed bag. Belushi seemed to bluster his way through the role of a rough-edged, corrupt businessman. On the other hand, I liked Leonard's more subdued performance as the thoughtful and principled Verrall. It provided a nice contrast.

I left Born Yesterday feeling glad that I'd seen Arianda but disappointed with the play. I expected it to be much sharper, more witty and insightful. Instead, it felt plodding and dated and long. There were times, especially when Arianda's character was offstage, when I was bored.

The original production ran for nearly three years on Broadway, from 1946 to 1949. Perhaps in that less-cynical era, just following the war, the story had more power to provoke and shock. Sixty years later, it hardly raises an eyebrow.
Posted by Esther at 9:45 PM