The Shaggs: Philosophy of the World 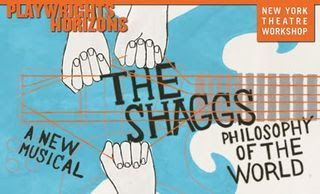 The Shaggs: Philosophy of the World, at Playwrights Horizons off-Broadway
Gratuitous Violins rating: ***1/2 out of ****

Unfortunately, shows are closing faster than I can write reviews. The last performances of The Shaggs: Philosophy of the World are this weekend, which is a shame because it's such an offbeat and absorbing musical.

The Shaggs tells the true story of the Wiggin sisters in New Hampshire in the late 1960s whose father, Austin, had a premonition - which turned into an obsession - that they were destined to become a successful rock 'n' roll band. Sadly, the girls were supremely musically untalented.

As Austin, Peter Friedman is riveting - becoming more and more unhinged and controlling. Annie Golden as their mother, Annie, watches helplessly while the blue-collar family's savings dwindle and tries to control her husband's outbursts.

As Dot, Betty and Helen Wiggin, Jamey Hood, Sarah Sokolovic and Emily Walton are terrific. They're awkward teenagers who know they're awful and hate being onstage. They want to please their father but at the same time, they're petrified of him. Dot tries to be supportive, Betty is rebellious and Helen retreats behind silence.

Cory Michael Smith is appealing as Kyle, the gangly and goofy classmate who falls for Walton's Helen. (One quibble, it's never completely explained why she remains mute for much of the musical.) Kevin Cahoon, a favorite of mine from The Wedding Singer Broadway cast recording, has a funny turn as their agent.

Now you might ask, "Who would want to listen to 2 1/2 hours of terrible musicianship?" Composers Joy Gregory and Gunnar Madsen have come up with a very effective work-around. When the girls are using their "inner" voices to sing about their lives, they sound like angels. It's only when they're performing that you get an idea of how they really sounded.

And I really enjoyed the score - there's a hilarious ensemble number that takes place at the local high school, "Career Day." Hood is touching in "Don't Say Nothing Bad About My Dad." I was first smitten by the score of Hair from the movie, in which Golden played Jeannie, so it was thrilling to hear her solo, "Annie's Lessons."

Clearly, it would have been very easy to make fun of the sisters and their lack of talent but Gregory, who wrote the book, treats their lives with great sensitivity and poignancy. At a time when too many new musicals seem big and overblown, The Shaggs is human-scale, unique and refreshing.

As a band, you can't really say that The Shaggs faded into obscurity because they were always pretty obscure. But the sisters did get a burst of acclaim when their one-and-only album, Philosophy of the World, was re-released in 1980. Susan Orlean profiled them in The New Yorker in 1999. Here's the title song from Philosophy of the World.)
Posted by Esther at 1:10 PM

I LOVED The Shaggs: Philosophy of the World. But I agree with you - was never 100% behind the choice to make Helen mute. I understood why they did it, but it never really pushed the action forward in any way, it was just sort of there.

Thanks for the comment! I'll have to go back and re-read the New Yorker article. I just skimmed it before. Maybe Helen's muteness is based on fact.