A few thoughts on Harry Potter and the Deathly Hallows: Part 2 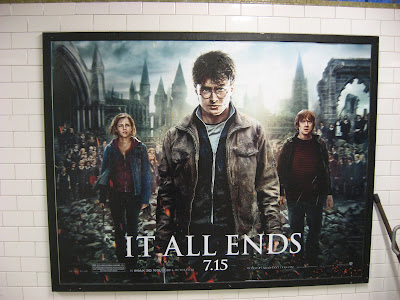 Every year there's a summer blockbuster that I end up catching months later on DVD and wish I'd seen it at the movies.

I didn't want that to happen with Harry Potter and the Deathly Hallows: Part 2, so this afternoon I became part of a record-breaking opening weekend for the final film installment of J.K. Rowling's series.

I've been kind of indifferent toward the Harry Potter movies. I saw the first couple, then skipped a few in the middle. To me, they weren't as interesting as the books, all of which I've read and enjoyed. Still, this was the last one, so I really wanted to see it on the big screen.

I never got around to Deathly Hallows: Part 1, and I was surprised that Part 2 began without any introduction to the characters or story. It just begins, like there was a short intermission and you've returned from the bathroom or getting a snack. Luckily, I remembered enough from the book that it didn't matter.

And I can understand the point of view of director David Yates. If you've never read a word of the books or seen any of the movies, it's unlikely you'd start with this one. Still, if you're thinking about taking it in just to see what the fuss is about, don't bother. Or at least rent Part 1 first.

Deathly Hallows: Part 2 has a dark, apocalyptic look that's so appropriate for a climactic battle with Voldemort. I got a bit choked up at the end, even though I knew what was coming. I liked it, although it's obviously special effects and action driven, which is why in the end, I prefer the books.

I was thinking afterward what a great job Rowling did in synthesizing British history and literature and culture. She explores this idea of a mythic, idealized English character in a strong and absorbing way.

There are shades of Shakespeare, Dickens, Tom Brown's School Days, the Arthurian legend, St. George and the Dragon, the Duke of Wellington and probably other influences that I'm not sufficiently Anglophile to pick up on.

And Rowling blends everything together in a way that's masterful. I wish there had been a series like Harry Potter when I was growing up. They're thick and detailed and wonderful books to just lose yourself in. (The closest would be Lord of the Rings but they're more for high school or college.)

The other thing I'd like to mention is Daniel Radcliffe. I was never a big fan of Radcliffe's from the movies. He always struck me as kind of a passive actor. But I realized in this final Harry Potter that he's perfect for the role.

I read online somewhere in the past few days where someone questioned (jokingly, I assume) whether Warner Bros. had been hoping for a growth spurt somewhere between the first and last films. The writer concluded that Radcliffe's size actually works in his favor, and I agree.

I think part of Radcliffe's strength as Harry is that he's not 6 feet 5. He's got this boy-man look and that gives him an appealing vulnerability and he uses it well. It heightens the underdog quality. I think his slender build also makes it easier for young audiences to identify with him. He's a life-size hero.

But the place where I've truly come to appreciate Radcliffe's talent is onstage. I thought he was riveting in his Broadway debut in 2008 as a troubled teenager in Equus. And he's utterly delightful making his Broadway musical debut this year, in How to Succeed in Business Without Really Trying.

I'm hoping Radcliffe will continue his theatre work, becoming part of a tradition of great British actors who move seamlessly between stage and screen.
Posted by Esther at 9:20 PM