The Motherf**ker with the Hat 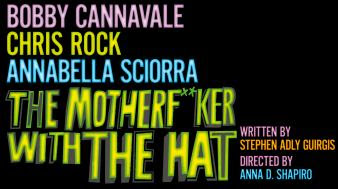 The Motherf**ker with the Hat, at Broadway's Schoenfeld Theatre
Gratuitous Violins rating: *1/2 out of ****

A few years ago I saw a Broadway play that I didn't think I'd like. I had an open slot during one of my New York City trips and friends recommended it, so I went to TKTS and gave Neil LaBute's reasons to be pretty a chance. Well, I loved it.

I was hoping the same thing would happen with The Motherf**ker with the Hat. I hadn't intended to see Stephen Adly Guirgis' play but it got terrific reviews, so I reconsidered and bought a (full price) ticket.

This time, sadly, I should have gone with my gut. It's not that I found the play so bad that I wish there'd been an intermission so I could have fled. It's just that I found it deeply disappointing and forgettable.

Let's start with the profanity.

I'll admit that The Motherf**ker with the Hat was funny. Director Anna D. Shapiro, whose work I admired in August: Osage County, kept things moving briskly. But I felt like the laughter was the titillating kind that comes from hearing naughty words. To me, going for a cheap laugh is just lazy writing - a sign that you can't think of anything witty or clever or meaningful to say. And after awhile, they lose their shock value.

Now, what was the point of this play?

I really tried to figure out what Guirgis was trying to say and honestly, I'm not sure. I mean, I know it's about people struggling with addictions - to drugs, alcohol, sex, violence. But it's not done in an especially interesting or compelling way. He's created a bunch of shallow, unsavory characters who mostly swear, shout, grow angry and betray each other for 90 minutes.

Bobby Cannavale is Jackie, an ex-convict and addict who has a longtime and volatile relationship with his girlfriend, Veronica (Elizabeth Rodriguez). When he finds a man's hat in his apartment, he becomes enraged, believing that Veronica is having an affair. His search for the motherf**ker to whom it belongs sets the play's events in motion.

Chris Rock, in his Broadway debut, is Ralph D., Jackie's AA sponsor who's trying to help him stay on the straight and narrow. Annabella Sciorra is Ralph's wife, Victoria. And rounding out the cast is Yul Vasquez as Julio, Jackie's supportive cousin.

Now, I have nothing against unsavory characters. For example, I thought Steven Pasquale was riveting as a total bully in reasons to be pretty. But the characters have to be more than caricatures. I need to feel something - hate them, love, them, root for them, despise them. I just wasn't drawn in by any of these people.

Cannavale was fine, but he played the same thuggish guy that I saw him play last summer in Trust. Rodriguez's Veronica is profane and hot-tempered from beginning to end. She's the latest example of an unfortunate tendency I've noticed to scream your way through a role. Rock seemed overpowered by everyone else onstage.

For me, Vasquez' Julio was the most interesting person in the play. When he talked about events from his and Jackie's childhood it put a restrained, touching and human face on the characters that I thought The Motherf**ker with the Hat sorely needed.

Anyway, this is the play's final week on Broadway. It garnered a slew of Tony nominations, critical acclaim and the producers announced that they recouped their investment. So I'm definitely in the minority. This one just wasn't for me.
Posted by Esther at 10:00 AM

And yet, you haven't forgotten it. ;)

Well, I agree. It wasn't incredibly well written, but I liked the slice of 'dependency' life it painted. I too liked Yul Vazquez's character the most. Certainly it was the most enlightened of the bunch.
Having met this group of actors and having been on the set, I do have a different perspective on the team. They really put their hearts into each performance, and were spent at the end of each show. Chris Rock's acting progress during the run was truly incredible. I saw the production 3 or 4 times and I could see his progress and growing ease on stage. Off-stage he was generous and approachable.
Although they started as the under-dogs of the season, poorly supported by their producer - Scott Rudin didn't make an appearance at either opening or closing night and didn't support the run with advertising - they ended their run strong with a strong star turn-out and sold-out performances.

Hey nyccase, thanks for the comment and for sharing your perspective. Pretty much everyone else I know who saw it really liked it, so maybe it was just me. I don't know, I was pretty much the only one who liked the revival of The House of Blue Leaves! And believe me, I do understand that the actors and creative team work very hard to create an entertaining and thoughtful work at every performance. I have respect for all of them. Thanks so much for reading!

Well ok Sarah, I will grant you that. I haven't forgotten it!