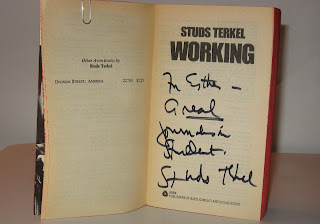 Terkel, a Pulitzer Prize-winner, helped popularize oral history as a genre in books like Working: People Talk About What They Do All Day and How They Feel About What They Do; Race: What Blacks and Whites Think and Feel About the American Obsession; and Hard Times: An Oral History of the Great Depression.

I met Terkel once, about 30 years ago, when I was a young, wet-behind-the-ears student at Northeastern University in Boston. At that time, The Boston Globe had an annual weekend-long book fair with all sorts of authors peddling their latest offerings.

I'm sure I was quite the sight when I approached him - eager and brimming with enthusiasm. I remember asking him how he found his interview subjects. I couldn't afford whatever new hardcover he had just published, so I bought a paperback copy of Working and asked him to sign it. I'm not sure why he wrote "A real journalism student," with the word "real" underlined.

I do remember that he was a very nice person in our brief exchange - gracious, encouraging and extremely approachable. I even dabbled a bit in oral history myself when I did a senior honors project - I interviewed people who had been students at Northeastern during the 1960s about their lives.

While I knew a lot about Terkel, I learned a few new things from reading the obituaries today. For example, I didn't realize that he'd been an actor - on the radio and on stage. He wrote radio scripts and acted in soap operas and once appeared in a production of Clifford Odets' play Waiting for Lefty at the Depression-era Chicago Repertory Group. The Chicago Tribune's drama critic Chris Jones has a brief tribute to Terkel as a friend of Chicago theatre.

Adaptations of two of Terkel's books, Working and Hard Times, made it to Broadway where, sadly, they weren't successful. Arthur Miller's The American Clock, inspired by Hard Times, opened on Nov. 11, 1980, and closed at the end of the month. A musical version of Working, with songs by Stephen Schwartz, began previews on May 5, 1978 and closed on June 4. In the cast were Patti LuPone, who played an editor and a call girl, and Joe Mantegna, in the roles of a migrant worker and an interstate trucker.

But a revamped version of Working, with additional songs by In the Heights composer Lin-Manuel Miranda, was produced earlier this year at Florida's Asolo Repertory Theatre. It'll be staged next year at San Diego's Old Globe Theatre, from March 7 to April 12. The original is available on dvd, although I think it's with a different cast.

I'd love to visit Chicago someday. Hog butcher to the world, city of the big shoulders, it sounds so much larger than life. And Terkel, along with poet Carl Sandburg and journalist Mike Royko, was one of the great chroniclers of the city, as well as of American life.
Posted by Esther at 11:18 PM