The four-volume set Broadway's Lost Treasures is the latest addition to my dvd collection and what a welcome addition it is. (Thank-you Theatre Aficionado - I used your gift card!) 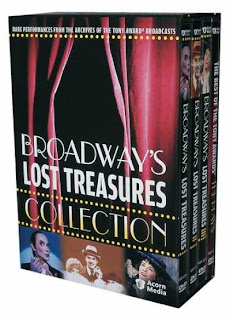 I've only watched Volume 1 so far - you have parcel these things out slowly. And I do wish plays were better represented. They're relegated to Volume 4, which I think is also the shortest.

It was great to watch clips of so many classic performances - Patti LuPone in Evita, (I think it's time for a revival!) Robert Preston in The Music Man, Yul Brynner in The King and I, Zero Mostel in Fiddler on the Roof, Gwen Verdon and Chita Rivera from Chicago, among others.

Sure, we've got the film versions of some of them with their Broadway stars, but not all. And these days, with fewer musicals getting made and the lag time increasing, I think it's even less likely that you'll see a great stage performance re-created on the silver screen.

I think all of the clips were taken from the Tony awards broadcasts and some aren't the best quality but that's okay. Just being able to watch them whenever I want is great. And I learned so much - Tommy Tune really is very tall! Now I know how to pronounce Len Cariou's last name!)

I especially enjoyed Jerry Orbach singing "Lullaby of Broadway" from 42nd Street. I think I would have loved 42nd Street, too, because it's got a Broadway theme and elaborately choreographed musical numbers.

On the other hand, while "Memory" is a beautiful song, seeing all of those human-sized felines prowling around onstage in Cats was a bit intimidating. I don't have anything against cats, I'm just not much of a cat person. I think that show would give me nightmares.
Posted by Esther at 9:24 AM

Love your comment about Cats! So funny and true.

Thanks, Emily! My mother was always afraid of cats and I think some of that probably got passed down to me. I just didn't find them at all appealing in that clip. They were kind of scary! And there were so many of them, too!

Excellent choice!! It gets better on Volume 2, the best of the musical material I think. The fourth disc is most interesting - back in the days when they used to present excerpts from the best play nominees live on the telecast; one of my favorites is Maggie Smith and Margaret Tyzack in "Lettice & Lovage" (for which they both won Tonys).

Well I like to use my gift cards on something special - something that will remind me of the person who gave it to me. And when I saw it, I knew it was perfect. So thanks!

I'm really looking forward to the plays disc. I didn't realize they used to do excerpts on the Tonys. But it's just great to have all of these clips on dvd.