The High Line and literary highlights 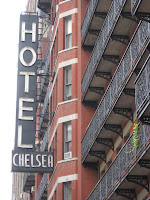 This weekend I finished the novel Netherland by Joseph O'Neill. For my tastes, the book was just okay, although it's been widely praised.

But what really intrigued me was that the main character, a stock analyst in post-Sept. 11 Manhattan, lives in the Hotel Chelsea. (I later learned that O'Neill also lives in the hotel, with his wife and kids.)

I walked by the Chelsea totally by accident on my trip to New York last month. It's amazing how many great things I come across in Manhattan just through serendipity - landmark buildings, a Paul McCartney concert. 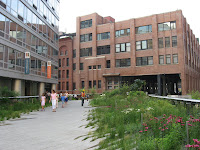 This particular day I started out early by taking the subway to the Meatpacking District to see the High Line park.

(This was my first visit to the Meatpacking District, where high-end boutiques and trendy restaurants have replaced the slaughterhouses and packing plants of the early 20th century.)

The park has been built on an elevated railway on the west side of Manhattan that carried freight to factories and warehouses in the 1930s.

Now, a section of the railway has been landscaped with wildflowers and wooden benches where you can stretch out and relax, look out at the Hudson River. You'll see people strolling, reading, eating, artists drawing on sketchpads. 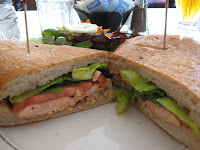 It was really nice and I could have stayed longer but it was getting hot and parts of the High Line aren't very shaded. So, I decided to walk through Chelsea. I stopped for lunch at a little restaurant called Rafaella, where I had a very tasty salmon panini. (You don't often find salmon on a panini. It was quite a treat.)

Then I walked up 23rd Street to get the No. 1 line subway to Lincoln Center, so I could see the Katharine Hepburn exhibit at the New York Public Library for the Performing Arts. That was when I spotted the sign for the Hotel Chelsea.

I really only knew one thing about the Chelsea - that Nancy Spungen, the girlfriend of Sid Vicious, from the punk rock band the Sex Pistols, was found stabbed to death there in 1978 under mysterious circumstances. So I thought, maybe this is kind of a seedy place. 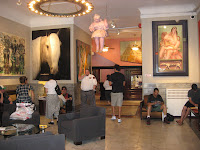 But I read the bronze plaques attached to columns on both sides of the door, and I was amazed. I hadn't realized the hotel was so historic. And from the lobby, it's quite nice.

The Chelsea opened in 1884 as a cooperative apartment house in what was then New York's theatre district. (I didn't even know the theatre district was ever in a place other than Broadway.)

It became a hotel about 1905 and over the decades, numerous writers, actors, musicians, filmmakers and other artists have passed through, including Thomas Wolfe, Arthur Miller and Dylan Thomas. Arthur C. Clarke wrote 2001: A Space Odyssey at the Chelsea. Bob Dylan and Joni Mitchell both wrote songs that mention the hotel.

I walked into the lobby, which is decorated with some interesting artwork. Unfortunately, I couldn't see a room, but they do give tours of the hotel and I'd love to take one someday, just to bask in the literary glow.
Posted by Esther at 12:05 AM