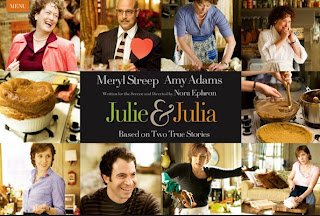 I just loved Julie & Julia. The two hours flew by.

A lot of times, I'm disappointed when I see a movie based on a book I've read but this time, I might even like the movie more. Although it's been a couple years since I read Julie Powell's memoir on working her way through Julia Child's Mastering the Art of French Cooking, so I can't really compare.

Meryl Streep is such a commanding presence and okay, maybe a tiny bit over the top at times with the high-pitched voice, but she imbues Julia Child with a humanity that makes her more than a caricature.

And Amy Adams is so appealing as Julie Powell, an office worker who feels like she's in a rut. Has she ever given a performance that I didn't like? I don't think so. Maybe her character is a little self-absorbed but aren't we all at times?
One of the things director Nora Ephron does which I really like is make the stories of Julia in Paris in the 1950s writing and cooking and Julie in New York City in the aughts blogging and cooking so parallel. A Julie scene dissolves into a Julia scene so seamlessly.

And it's interesting to see how much they have in common. They're both searching for something meaningful to do, something about which they feel passionate. And they're aided by incredibly supportive spouses, Chris Messina as Eric Powell and Stanley Tucci as Paul Child.
Plus, Paris looks beautiful and everyone in the movie is drinking wine and eating food that looks great - crusty loaves of bread, rich chocolate cake, hearty beef bourguignon. You feel so satisfied when something you've cooked turns out well. It made me want to go home and de-bone a duck.
Finally, how could I not love a movie where one of the main characters is a blogger!

In fact, the movie is kind of like an ode to blogging - the uncertainty when you're first starting out about whether anyone will read it, the excitement when you discover people are reading your words.
I could so relate to those scenes of Powell writing her blog posts, her thrill at getting comments from people she doesn't know, the bond she creates with her readers. (You can read the first Julie/Julia Project post.)
It's like seeing my life up there on the big screen. Or at least it could have been my life if only I'd thought of doing something nearly as clever.
Posted by Esther at 9:30 AM

I plan to see this as Meryl Streep is my favorite movie actress and now coming from the blogging world....well, why wouldn't I see it? And I have not read the book so I won't worry about the comparison.

Let me know what you think after you see it. And Meryl is great.

Glad you liked the movie. I'm planning on seeing it soon and it's nice to know that you liked it.

Hey Pam,
Hope you like it. I was listening to a film review podcast today and the two reviewers were less enthusiastic, especially about the Julie parts of the story. But I'm not really into over analyzing it. I had a good time and that's enough for me!