I've written before how excited I am about the Broadway revival of Ragtime. When the cast was announced yesterday, two names caught my attention: Bobby Steggert as Mother's Younger Brother and Stephanie Umoh as Sarah. 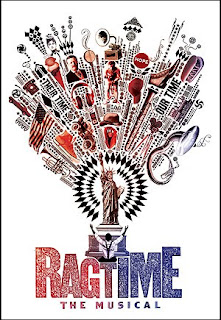 Steggert played Jimmy Curry, Audra McDonald's younger brother, in the 2007 Broadway revival of 110 in the Shade. I thought he was terrific in making a supporting part memorable.

He's one of many cast members reprising their roles from last spring's highly praised production of Ragtime at the Kennedy Center.

Umoh, on the other hand, is a newcomer to the cast. (Although she played the part in 2006, with the New Repertory Theatre, in Watertown, Mass. The Boston Globe review called her "a dazzler.")

I've never seen Umoh on stage but you could say I've been following the career of the 2008 Boston Conservatory graduate. She was the subject of a multipart series in The Boston Globe in 2007 that chronicled her senior year.

In the stories, she talked about her background - growing up in Texas the daughter of a white mother and a Nigerian-born father - how she got into musical theatre, the struggles of working her way through school. (While she got some financial aid, Umoh estimates that she owes $130,000, before interest.)

I thought this quote from Conservatory president Richard Ortner was pretty interesting: "None of these students have come to us without years and years of voice lessons and after-school acting lessons, and, for the instrumentalists, private lessons since the age of 5."

Except Umoh, whose training consisted of singing lessons in high school with the leader of her church choir.

Now, all of the hard work pays off in a dream-come-true moment. And how fitting, in an American Dream kind of musical!

She'll make her Broadway debut, in a role created by McDonald, her idol. And hopefully, she'll be able to whittle down some of that crushing debt.

Those are two things worth getting excited about.
Posted by Esther at 11:39 AM

(and I've SEEN it already!)

Bobby was terrific. Too bad Jennlee Shallow already had another gig lined up because her Sarah was beautiful but I'm sure Umoh will be great! Christiane Noll is a revelation as Mother.

You are so lucky - you get to see everything ahead of time! Which is good, because then you can help me decide whether or not to see it. And I think we do end up agreeing a lot of the time - like with 13. And West Side Story, which I did like, even if I didn't like the Spanish that much.

Yah, I've been sort of on a role haven't I? WSS, Ragtime, Hair in the park, 13, 9 to 5 (you liked that right?). I enjoyed Minsky's. It's not brilliant but its fun so hopefully we will see that grow, and I LOVED Giant so hopefully it'll get another run somewhere.

It's gonna be great I'm sure. I loved the show when I saw it here years ago. They did the 'tryouts' here in Toronto before heading for the big time.

Thanks for the background (and the link to the articles) on Umoh. It's all helping to get me psyched for the show. Cheers, jan

Hey Vance,
Yeah, I really enjoyed 9 to 5 and I think it'll do well on tour. Sorry it never caught on with the tourists. Christopher Fitzgerald was the main reason I wanted to see Minskys. Without him, I'm just kind of meh about it. But I would love to see Giant.

Hey Dale, great to hear from you again! You are so lucky to have seen the original Ragtime. I saw a clip from the Tony awards and it just looks and sounds so great. I'm very psyched.

Hey Jan, glad I can help. And Stephanie Umoh's story is so great. I'm glad I could help spread the word about her. What an incredible opportunity.