Getting carded at the NYPL

I don't buy a lot of souvenirs when I go to New York. I've got my theatre tickets and my Playbills and I've bought a few Broadway show magnets. But last month I came home with a great one that didn't cost me anything.

The first time I went to the New York Public Library for the Performing Arts it was on a very rainy afternoon, so I decided to take advantage of some free Internet access. All I had to do was show my out-of-state driver's license and I got to use a computer. 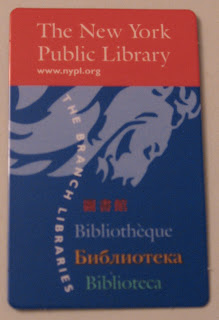 Well, that was in May 2008. When I went back last month to see the Katharine Hepburn exhibit, the computers across from the circulation desk had been moved to another room.

Really? Well, as a lifelong library fan and book lover, this was pretty thrilling. I didn't hesitate for a second. I don't think I've been so excited since I got my first library card, back when I was in the second grade.

So I filled out the requisite paperwork, which wasn't too difficult, and within a matter of minutes I had my very own New York Public Library card, entitling me to borrow materials from all NYPL branch libraries and from the Brooklyn Public Library.

Okay, I probably won't be borrowing any books but as you can see, it's a pretty nifty looking card and you know I'll be keeping it in my wallet. It's probably the closest I'll ever get to living in New York City.

By the way, if you're visiting New York, the main library, at 5th Avenue and 42nd Street, adjacent to Bryant Park, with the two imposing stone lions in front, is a beautiful building. And it has a great gift shop.
Posted by Esther at 5:30 PM

I can completely relate to your excitement about this library card. About 5 years ago, I visited Washington DC for the first time. I went with a friend who is a fellow bibliophile/library lover. Of course, we had to visit the Library of Congress. And, you guessed it, we both got Library of Congress Library cards! Mine is still in my wallet. It's one of my most prized possessions. I'm a real dork!

Oh wow, I'll have to get one of those the next time I go to Washington! And not dorkish at all!

I still can't believe they gave me a card just to use a computer. I mean, it's not like I'm a taxpayer or anything!

As a librarian, I am so very excited by the fact that I can get library cards from both NYC and DC. Awesome!

Seriously? I wonder if you have to be American tho? But that's actually kinda neat.

Thanks for the comments, Vance and Emily. I think now I'll start collecting library cards wherever I travel! ;-) And Vance, give it a try!