When in Rome ... go to Curtains

The musical Curtains is being presented next week in upstate New York as part of Rome Capitol Theatre's SummerStage series. I've been eagerly following its progress through updates from my Twitter pal Chris Van Patten. 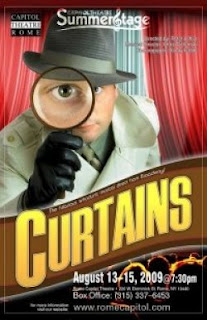 I used to live in Syracuse, only a short drive away on the New York State Thruway. And Curtains, with the talented and gracious Tony-winner David Hyde Pierce, was the first musical I ever saw on Broadway. It's funny and hugely entertaining and I still love listening to the cast recording.

Set in Boston in 1959 during the tryout of a Broadway musical, it has a backstage murder mystery plot, big production numbers and a memorable cast of characters, including a theatre-loving homicide detective who tries to catch the killer.

I've been hoping for a national tour of Curtains, with a stop in Boston, naturally, ever since the Kander and Ebb tuner closed on Broadway last year. Supposedly one is in the works beginning next March but that's an odd time to start a tour, so who knows!

Still, I'm happy to see that a show I enjoyed so much is finding a new life in regional and community theatre.

Plus, there's something so fitting about a community theatre putting on Curtains. Lt. Frank Cioffi, the detective who tries to solve the murder at the center of the story, lives to tread the boards himself every spring:

"Each year from May twenty-third to the twelfth of June when I turn my life over to the Swallow Street Players, that's more than a vacation for me. That's an overture of hope, it's the curtain rising on the greatest joy of my life."

While I don't miss the winters in Central New York, I am sorry I'll be missing this show. But if you live in the area, definitely go see it. Here's a great video that Chris has put together:

SummerStage is such a great asset to central New York. Back when it started, it was an actual union summerstock company, with Equity performers, union stagehands, etc. Unfortunately, as time grew on the area couldn't support it, and when the local air force base closed it just became too much to handle. Fortunately a group of theatre-loving community members stepped up, but every year we still have to contend with smaller and smaller budgets, fewer performances, and the like. When it comes down to it, marketing ends up being the last thing anyone thinks about!

That's part of why I so so so appreciate this... we're really fortunate to have the regional premiere of this fantastic show, and we really want to share it with as many people as possible. Marketing and promotions is a mainly volunteer effort, and it's posts like this that really help the cause, and help us continue to produce musical theatre every summer.

Again... thank you so much! I can't thank you enough!

Awww, you're very welcome. Glad I could give you a little plug. And thanks for the very interesting background on SummerStage, too. I'm glad the community has been able to keep it going.

I think Curtains is such a great show for a community theatre. And I wish it had run longer on Broadway. Thanks for helping to keep it alive!