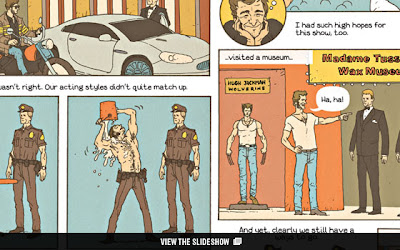 Even though it's 90 degrees outside, it's fall preview inside the pages of New York magazine. I've read over all the theatre previews and these are my favorite parts:

The illustrated Hugh Jackman and Daniel Craig Show is clever and definitely makes me even more excited to see them as Chicago police officers in A Steady Rain.

Will Daniel Craig loosen up and shed his James Bond persona? Will Hugh Jackman be able to keep his jazz hands in check? I can't wait to find out. Previews begin Sept. 10 at the Schoenfeld Theatre

However, New York magazine, I was a little disappointed in your Q&A with playwright Tracy Letts. I love August: Osage County, too. But it would have been nice to have a couple of questions about Letts' newest transfer from Steppenwolf to Broadway, Superior Donuts, which begins previews at the Music Box Sept. 16.

The play, about the white owner of a decrepit Chicago doughnut shop (Michael McKean) and the black teenage employee who wants to change it for the better (Jon Michael Hill), is one of the shows I'm most excited about seeing this fall. But all I got were a few Donuts crumbs and more about Letts' previous work.

This is as much as we get:

NYMAG: Superior Donuts sounds a lot less personal than August.
Letts: "It was supposed to be an exercise. I thought, I wonder if I can write about people that don’t have any relation to me. But I can’t! I was writing about myself."

Finally, my first taste of how funny Julie White can be came in her Tony acceptance speech for The Little Dog Laughed.

And White is pretty amusing as as well in this interview about her off-Broadway role in The Understudy, which begins previews Oct. 9 at the Laura Pels Theatre. She makes me want to see a play I was on the fence about:

"It’s deep. Death is all over that play. But you know, I’m in it, it’s a Theresa Rebeck show, it’s gonna be funny. We did a reading of it at the Roundabout, and it just went over like a thousand bastards."

I'm assuming that's a good thing, although I can't be sure. I Googled "went over like a thousand bastards" and apparently Julie White is the first person in human history to ever utter it.
Posted by Esther at 8:31 AM

Thanks for the link to Letts's interview. I also like his response to the critics who've compared August to a sitcom. What are they thinking? That because it finds humor in people bickering, it's like the mind-numbingly horrible Mama's Family? Seems like a rather shallow analysis to me.

Yeah, I agree. I still wish there had been a couple more questions and answers about Superior Donuts, though.

I loved Julie White in Little Dog Laughed and this may put her new play on my list! I'm still waiting to hear about Osage's casting when it comes to town here.

Hey Dale, I never had a chance to see The Little Dog Laughed but I did see Julie White in another off-Broadway play, From Up Here, in which she portrayed a very stressed-out mother. And she was good in that.