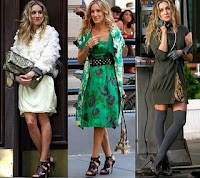 After I finished my Sex and the City marathon, one of the things that struck me as a little odd was, we learn very little about the lives of Carrie, Charlotte, Miranda and Samantha before they came to New York City. Their childhoods and families have always been a bit of a cipher.

I remember reading somewhere that series executive producer Michael Patrick King made the details vague on purpose, almost as if he didn't want the women to have had separate, earlier lives. It was like their lives only began once they got to New York City and met each other.

Sure, there are a few hints here and there if you listen closely. Miranda is from Philadelphia and went to Harvard; Charlotte had a blue-blood Connecticut upbringing and graduated from Smith; Samantha is from a working-class background.

But I was especially curious about Sarah Jessica Parker's Carrie. Where did she grow up? Where did she go to college? Why didn't any of her family ever come for a visit? I checked Carrie's Wikipedia entry and she did mention that her father left her mother when she was 5 years old. I guess I wasn't listening closely enough.

So I was pretty intrigued to read this week that it looks as though some of my questions will be answered. HarperCollins announced that Candace Bushnell, whose columns for the New York Observer inspired the television series, is writing two novels about Carrie's teenage years, called The Carrie Diaries, and geared toward teenage readers. The first book will be published in the fall of 2010.

According to the publisher, "The books will take readers back to Carrie Bradshaw's formative years in high school, giving an inside look at Carrie's friendships, romances and how she realized her dream of becoming a writer."

This will be Bushnell's first novel for young adults. "I've always been interested in exploring Carrie's teenage years," she said in a statement. "Carrie in high school did not follow the crowd - she led it. It was there that she began observing and commenting on the social scene."

Bushnell's editor, Alessandra Balzer, tells London's Independent newspaper that she hopes to sidestep such potentially controversial topics as, well, sex. "The kids will be doing what teenagers realistically do, but it's not going to be provocative for the sake of that," she said. "I would never put something in just to put it in. But if it was organic to the story, and if it was something that felt real, then it would need to be in there."

And apparently, Carrie grew up close to New York. A HarperCollins spokesman says while all the details haven't been decided, "I think she'll come [to New York] the way Candace did, with her friends, to hang out in the city on the weekend, and have a lot of social interaction there, and then eventually she'll come to college here, as Candace did."

The HBO series, of course, was geared toward adults. And this summer's movie carried an R rating. (Although an edited version of the series is now shown in syndication.) So it's interesting that the novels will be geared toward teenagers. Bushnell could write them for an adults, after all, and they still would have found an audience - with adults and teenagers.

But maybe this is a genius marketing move. I'm sure the series has lots of fans among teenage girls who love Carrie's sense of style and they'll gobble up the books - along with their mothers and older sisters. And of course, that will help ensure new generations of fans for Sex and the City. Who knows, maybe someday Carrie's early years will become a tv series, too.
Posted by Esther at 9:31 PM

I just finished reading the Carrie diaries, the book was good but there were a few discrepancies between it and the show. She speaks briefly about the 2 boyfriends she had in high school and never mentions Jeremy ( David Ducovny's character from the show.) Also as mentioned before he father was supposedly absent in her childhood according to the show but here in the book her mother is.
Although I did like the book, being a big Sex and the City fan it was a little dissapointing. Hopefully the next book will
be more on point.

Thanks for the review although I'm sorry the book was a little disappointing. It's definitely something I'd like to read. I'm not sure how much Candace Bushnell cared about making it totally synch with the TV series! They are two completely different animals so maybe she wasn't too concerned.