Revisiting Little House on the Prairie 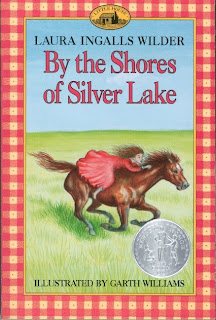 I was going to tackle the three middle books, because that's roughly the time period that the musical's plot covers. Unfortunately, I've only had a chance to read one, By the Shores of Silver Lake. Published in 1939, it's the fifth out of the nine books in the Little House series. The story takes place in 1879 and 1880, as the Ingalls family moves from Walnut Grove, Minnesota, to the wide open spaces of the Dakota Territory, lured by the government's promise of free land.

I'm sure one of the things that appealed to me when I first read the Little House books was that the stories were about girls my age living such an unimaginably different life. But in returning to the series, I realized that I'd forgotten some of the ways in which that life was most different.

For example, while Charles Ingalls goes on ahead of his family, Caroline and the girls - Mary, Laura, Carrie and baby Grace - travel part of the way by train. It's the children's first train ride and I'd forgotten about what a frightening experience it was for 12-year-old Laura. "Trains went faster than horses can run. They went so terribly fast that often they were wrecked. You never knew what might happen to you on a train."

The story opens just after Mary has been blinded by scarlet fever, so Laura explains in detail what they're seeing during the journey. Her descriptions are incredibly beautiful and evocative. They travel the rest of the way by wagon to the railroad camp at Silver Lake, where Charles Ingalls is working. The land in front of them is so vast, it barely seems like they're moving at all. "The farther they went into the West, the smaller they seemed, and the less they seemed to be going anywhere."

I'm sure the near-poetry of the language was lost on me the first time I read it, but this time, it made an impression. You really get a sense of the wide open spaces in Laura Ingalls Wilder's description of "the endless waves of flowery grass" and "the enormous stillness that made you feel still. And when you were still, you could feel great stillness coming closer."

Another part of the story that really struck me was the violence. There's drunken carousing and fighting and killing. When I read all of the Little House books as a kid, and I don't remember them being particularly violent. Maybe I just glossed over that stuff, but it was a little shocking. You definitely get a sense of the lawlessness of the Dakotas in the 1880s.

Charles is the storekeeper at the Silver Lake camp, and part of his job is to pay the railroad workers. At one point, the workers riot because they're only getting paid for two weeks instead of a whole month, and a paymaster, who brings the money, is nearly killed. Later, a homesteader is shot and killed by a claim jumper. Throw in a few curse words and some scenes would be right at home in the HBO series Deadwood, which also takes place in the Dakotas during roughly the same time.

By the end of the book, Charles Ingalls stakes his claim to 160 acres of land under the Homestead Act. The chapter describing the frenzy at the land office is pretty interesting. There are a couple of hundred men pushing and shoving while they wait for the office to open. He literally fights his way into the office to claim a particular parcel before another homesteader, who also had his eye on it, gets a chance.

If you go to the Web site for the Ingalls homestead in De Smet, South Dakota, you can actually see Charles Ingalls' land records from The National Archives. It's very cool. I wish that had been available when I was a kid.

Reading By the Shores of Silver Lake, I wondered what would make a man like Charles Ingalls bring his family from Minnesota to such uncharted and dangerous territory. What was it that made the pioneers who settled the West constantly look for even more wide open and unpopulated spaces?

Today, you're almost shocked that anyone would subject their family, young children, including a daughter who'd just been blinded, to this harsh life. The first winter, before they stake their claim, they're living in the relative comfort of the surveyor's house. But all of the railroad workers have left. Their closest neighbor is 60 mile away. If someone got sick or hurt, there's no way they'd be able to get to a doctor.

But I guess that's my 21st-century adult sensibility speaking. As a kid, I probably thought it was all very fascinating and adventurous. I'm glad I reacquainted myself with the Little House books. It was great to return to a series that I loved reading as a child. Now, I'm looking forward to seeing the story unfold on stage.
Posted by Esther at 11:45 PM