Daniel Radcliffe and the stage door 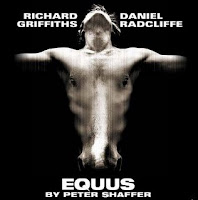 I've gotten e-mails from a couple of readers who are making their first trip to Broadway just to see Daniel Radcliffe in Equus. More than a few people have stumbled upon my blog by searching for his name and "stage door." So I know there's a lot of interest in whether he'll sign autographs. After digging around on the Broadway World message boards, here's a little update.

Several theatergoers have reported that Radcliffe is making an appearance at the Broadhurst Theatre stage door, signing Playbills and even an occasional Harry Potter dvd case. As always, past performance is no guarantee of future results. But if he's signing autographs now, there's a good chance he'll do it through the entire run of the play.

A Broadway World post from Without A Trace has a pretty detailed description of what it was like at the Equus stage door, and it's quite a mob scene, with hundreds of people screaming and pushing.

"Daniel Radcliffe was the last one out and he signed for A LOT of people. He first went around to the right side of the barricades and signed for most of the people in the front (he even signed someone's Harry Potter DVD cover). Then he came around to the left side of the barricades. Everyone around him was telling him how much they loved him in Harry Potter, etc etc.

"When he got to my spot in the barricades, I told him that his performance in this show was brilliant and that it is wonderful to see him in a role that most people wouldn't think to see him in...and he pulls it off so well.

"He then asked me if I had seen the show that evening, and I said no, that I had seen the first preview on Friday night. He responded with "Oh, that was a good night to be here!" Then I told him that I was telling all my friends to go see the show, and he said "We're not completely sold out, keep telling people to come!" Then I thanked him again and he seemed very gracious and pleased with my comments about his performance. Then, he went onto the next person, who mentioned Harry Potter again..."

Apparently, this person went to the stage door on a night when he or she wasn't seeing Equus, to stake out a good spot. That might not be possible if you're coming from out of town. So you should probably head out of the theatre as quickly as possible - even if it means giving up a pit stop. There'll be time for that later - after you get your autograph.

Stopping at the stage door is a great and time-honored part of going to a Broadway show. I've had wonderful experiences and disappointing ones so whatever happens, I can sympathize.

My advice is, stand your ground, don't be bashful about reaching out with your Playbill, remain calm and above all, just enjoy being part of the whole crazy scene. (Although they're not all as crazy as this one will be). Here's a video that will give you some idea of what you can expect.

Ok, if Equus is your first Broadway experience - have fun and break a leg! Hopefully you'll see a great show and take home a great souvenir. And of course, you'll want to return.
Posted by Esther at 12:10 AM

I've never been to a Broadway show, and wouldn't have thought about going to the side door. That's interesting. Have you done it on a lot of shows?

When I'm with my younger sister, I do it all the time (she wants to, I abide and use it as my "excuse" to go.. haha).

If stars don't want to sign, they usually sneak out the theatre another way, so if you see them at the stage door, they usually don't mind autographs or pictures. Some are very gracious and take pics, sign everything and are just surprisingly nice about it (Kevin Spacey, Sarah Jessica Parker, Bradley Whitford, Bradley Cooper, Paul Rudd, Robert Sean Leonard come to mind), some are polite but just ask not to be photographed (Patrick Stewart was nice about signing but just asked not to be shot because he was too tired), and rarely are people annoyed about it (sadly, it was someone in Equus and I'm not talking Daniel Radcliffe).

Mostly though I find they get excited to see us so excited about their performances.

(Although that someone in Equus was during a previous show on Broadway).

Usually though I like going to shows with up and comers (Spring Awakening, the revival cast of Chorus Line, [title of show]) who are totally as excited as us.

Hey Amanda,
I haven't gone to the stage door after every show, but quite a few. Almost always, the performers are incredibly gracious. Although there have been a few who disappointed me, which I've written about. It's just a fun thing to do, a way to extend the Broadway experience for another half hour or so! And I do get a thrill out of meeting the performers I've just seen on stage. But when you get a movie star, like Daniel Radcliffe, it can be quite a mob scene.

Oh Vance, you are such a terrific brother! What a lucky sister.

Of course, Kevin Spacey was the first autograph I got, after my first Broadway show, and he was great. But I have to give a special shoutout to the casts of Curtains and Spring Awakening. Everyone in both casts took a great deal of time to meet and talk to their fans, sign autographs, pose for pictures. I loved both shows and the stage door was just the icing on the cake!

It reminds me of going to the parking lot behind medium-venue concerts (or wherever the band congregates; that changes). I've met several bands that way, and usually they just hang out and talk and are glad you're there.

I'd never thought about going to the stage door but it sounds like a great way to cap off a great evening and see some talented people up close.

Oh Dale, it's so much fun! You get to commune with yhour fellow theater fans, compare notes on what shows you've seen.

Then, there's the excitement of waiting for the actors to come out. It's kind of thrilling to meet the people you saw on stage, tell them how much you enjoyed their performance. You can't do that after a movie!