The end is near for Xanadu 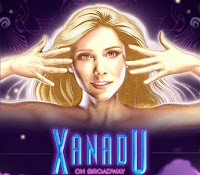 Wow, first time I've ever heard of this happening: a Broadway show that's already announced its closing date is moving that date up to close even earlier. Maybe it happens more than I think and I've just never noticed, or it hasn't happened recently. Whatever, it was a surprise to me.

Xanadu had been scheduled to play its last performance at the Helen Hayes Theatre on Oct. 12. But today, the show's producers announced that it will skate off into the sunset this Sunday, two weeks earlier.

The musical began previews on May 23, 2007, and will have played just over 500 performances by the time it closes. It also garnered four Tony nominations. Not too bad!

According to Playbill, "The producers released a statement saying that the decision to close the show early was made to avoid losses in the current economic climate."

Xanadu was at 61 percent capacity last week, with an average ticket price of $55.94. Attendance was down about 2 percent from the previous week.

It's one thing to realize that things aren't going well, but to be in such bad shape that you've got to pull the plug practically immediately? And on a show that's been running for more than a year? This does not sound good for Broadway at all.

Unfortunately, I never got a chance to see Xanadu, although I saw the cast - notably Kerry Butler and Cheyenne Jackson - perform on various tv shows and on the Tony Awards. It always looked like fun.

I know that Cheyenne's impressive physique garnered lots of attention. But as a huge Annie Hall fan, I'm most disappointed that I missed my chance to see Tony Roberts on stage.

A national tour, with Elizabeth Stanley, from Cry-Baby, starts Nov. 11 at California's La Jolla Playhouse, and then moves to Chicago in January. Hopefully, it'll come near me. This is one that will definitely go on my touring calendar.
Posted by Esther at 1:54 PM

It's not the first time and it won't be the last. It is a business, after all and September is bad - kids and their parent$ have gone back to school...the remaining tourists are Eurotrash and the like...and the fall is the busy time for opera and classical music, thank God.

Hey Sarah,
I guess it's the fact that they set a closing date and then changed it that surprised me. But maybe the producers figured it wasn't worth it to pay everyone for another two weeks and decided to cut their losses.