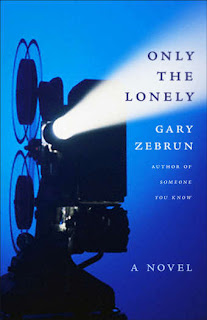 My friend and colleague Gary Zebrun's second novel, Only the Lonely, has just been published by Alyson Books. And I figure, what's the use of having a blog if you can't give a friend a plug? Gary will be reading from his book tomorrow at 7 p.m. at Books on the Square, 471 Angell St., Providence, and he's got several other appearances lined up over the next couple of months. (See the list below.)

Here's a summary of the plot: Asim, gay and 19, is ready to bust out of his rundown steel town, Lackawanna, N.Y., for the University of Michigan. Even the cherished family business - a movie house called The Bethlehem - and its nightly dose of celluloid dreams no longer captivate him. But the bright future he envisions is turned upside down when his father dies and leaves him with the keys to the theater and the job of caring for the old man's Russian lover. As if he needs another problem, he discovers that his brother Tarik is headed off to some kind of training camp in the Afghanistan desert, and when he returns, he ensnares Asim and others in a dangerous fanaticism that peaks on September 11, 2001.

Only the Lonely has garnered some good reviews. Publishers Weekly says: "With his memorable cast and nicely underplayed big themes, Zebrun delivers a new and worthy perspective on the 9/11 experience."

Gary is a graduate of the Brown University writing program and he's received MacDowell, Yaddo and Breadloaf fellowships. His first book, Someone You Know, was a finalist for the 2005 Lambda Literary Award. His work has appeared in The New York Times, The New Republic, The Iowa Review, Sewanee Review, The Believer Book of Writers Talking to Writers, and elsewhere. (And despite that rather serious picture, he's a very sweet, witty person.)

Here's some information on his book tour:

And he was kind enough to answer some questions for me:

Why did you decide to write a novel with a 9/11 theme and what makes yours unique?

Writing any fictional account dealing with that terrifying day, even now years later, taxes the imagination with questions like: How do you not exploit it? How do you avoid clichés?

Once I chose to write a story that included a wannabe Islamic terrorist from Lackawanna, a perspective on 9/11 was unavoidable. For nearly the entire novel, which begins in February 2001, that terrible day remains in the background in the readers’ minds, since the characters don’t find out about it until the last day of the story.

When I did, at the end, write about the events of the day, I tried to recreate them factually as they were presented on television and then I imagined the reactions of the three main characters — the brothers Asim and Tarik Zahid, and the old Russian woman Sonia Markovich — as they watched the events of the day unfold.

Your novel is set in an Arab-American community in Western New York. Why did you choose that community to write about?

I had wanted to write a novel set in Lackawanna, New York, for a long time. My father managed a movie house there, the Abbott Theater, and when I was a kid I used to spend weekends, from the matinee to the last show, watching films. I tried to write about the place, but it never worked.

A year after 9/11, when the six Yemeni Americans were arrested as a suspected terrorist cell, I couldn’t get Lackawanna out of my head. I don’t, however, try to tell their story, even though there are parallels such as the imam who arrives in the city to recruit young men for fundamentalist religious training in Pakistan and Afghanistan.

But Tarik, the wannabe terrorist in my novel, is nothing like any of the Lackawanna Six suspects. He’s a loose cannon, a psychotic-loner. The Lackawanna Six, as far as I could gather, were mostly curious about fundamentalist Islam and misguided.

When I got hooked on the idea of writing about two Arab-American brothers — one gay and the other devoted to extreme fundamentalist Islam — I read extensively about young Muslim men. After 9/11, there was a ton of material to go to: books, documentaries, articles in newspapers and magazines, and of course, the Internet.

But I needed a way to turn my research into something personal, a way to get in the heads of these characters whose experiences are so different from mine. Movies were the avenue for me to do that. The three main characters in Only the Lonely all interpret their lives through films: For instance, Asim Zahid loves John Travolta in Saturday Night Fever, Sonia Markovich is fascinated by Charlie Chaplin and his Little Tramp, and Tarik nearly becomes Travis Bickle in Taxi Driver.

The main character, Asim Zahid, is Arab-American in an American society that increasingly regards him with suspicion and he's a gay man from a culture that does not tolerate being gay or even acknowledge the existence of gay people. How do both of those things shape him?

Because he is an Arab-American in Lackawanna and gay in a religion that for the most part sees his sexuality as an "abomination," he has felt pretty isolated for most of his life. The movie house provides him a kind of sanctuary. Movies can be a transformative experience (and they are for Asim) but sitting in a darkened theater, more or less alone with a story on the screen, is also an isolating experience.

Eventually, Asim realizes that escaping into films is no substitute for a real life. He aches to bust out of Lackawanna and into a world filled with human possibilities, which the University of Michigan represents for him.

Asim's homosexuality was also a way for me to write about the intolerance of religion, not just Islam but nearly all religions. At the time of 9/11, I was reading a lot about how fundamentalist Muslims treat gay men. I was stunned by the cruelty and violence against gays. I think religion is the root of all bigotry. I've gone, in my own life, from being a devout Catholic to an atheist. My feelings about extreme Islam are no different from how I feel about fundamentalist Christianity.

The cover of your book is illustrated with an old movie projector. Are you a big movie buff, and what role do they play in the novel? In your research, did you have to watch a lot of movies you'd never seen before?

The movie theme (or obsession) developed long ago for me, when I was a kid at the Abbott Theater watching the same movie two or three times a night. All of the old films in the novel are ones I loved and saw in the dark in Lackawanna, either as first-runs or revivals.

If there were ever a movie version of Only the Lonely, do you have any actors in mind for any of the characters?

I suppose I'd be happy if a bunch of film students at some obscure college wanted to make a 101-course movie of the book. But even then, there's a better chance of it snowing in the tropics.

This is your second published novel. Was it harder to write than the first one? How long did it take and how many drafts did you write? How did the novel change during that process?

Both my novels swirled around in my head for a long time, as long as a year, before I started to write them. And yes, there are many drafts once the first is finished. With each new one, many things change. Much gets cut; characters get developed further. I actually love the process of revision, even though it's not as surprising imaginatively as the first draft is.

What advice would you give to budding novelists?

What books or novelists made you want to be a writer?

No one in my family was a reader. I read my first novel, Lord of the Flies, when I was a freshman in high school. I was hooked. Next I read The Red Badge of Courage. I fell in love with the 19-year-old deserter Private Henry Fleming.

After that, I couldn't wait for the next assignment. I had terrific English teachers too, so the books that followed introduced me to writers who not only told engaging stories but wrote beautifully.

I guess reading made me want to be an artist, because artists, I thought, did more with their lives than simply work for a paycheck. I couldn't sing. I couldn't paint. I couldn't dance. I couldn't act. But I thought, maybe, I might be able to write. I've been trying to learn ever since.

What's your next novel going to be about?

Well, it's interesting that the author of Gratuitous Violins should ask this. I just finished a novel about a concert violinist from the Buffalo Philharmonic Orchestra. He's married and has twins. But at 35, he has a meltdown and leaves his family and job to search for the priest who molested him for nearly 10 years when he was a kid. Religion, it's hard to escape it.
Posted by Esther at 12:21 AM