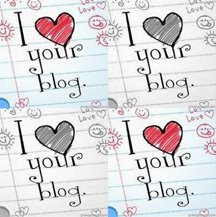 Los Angeles-based screenwriter and blogger Stella Louise, of Well Above Average, has kindly given a shoutout to my humble little corner of the blogosphere. Thanks, also, to Linz of Linz McC's Completely Pointless Blog, who gave me an honorable mention. And I just want to point out that her blog isn't pointless at all!

Of course, with that recognition comes the obligation to pass along the love.

At first I wasn't sure how to go about doing this. I love all of my theatre-blogging buddies, many of whom I've met, and I'd hate to leave any of them out. But I've mentioned many of them, and you all know who they are. They're all on my blog roll. So just to be different, I thought I'd give shoutouts to blogs that cover some different ground. They're ones I've never mentioned but enjoy reading.

Blog of a Bookslut: Some blogs I love because the personalities of the blogger really shine through. Then there are others I love because they do all the heavy Internet lifting for me. This blog is a great example of the latter category. It's link heavy but they're great links, to stories I wouldn't have found otherwise, like the form letter that the late science fiction writer Robert A. Heinlein sent in response to fan mail.

Carolyn Kellogg used to blog as Pinky's Paperhaus, but now she's got her own domain name, as well as a freshly minted MFA from the University of Pittsburgh. And she's the lead blogger for the Los Angeles Times book blog, Jacket Copy. There are lots and lots and lots of book blogs and some of them can be a bit dense and ponderous and make my eyes glaze over and my head hurt. But Carolyn/Pinky never does that. Her blog is lively and fun. When she publishes her first novel, I definitely want to read it.

Gignacery - a Family Frolic: As you can tell from my list, I like blogs that offer up little slices of life. Amanda and Jason write with great warmth, humor and insight about raising their three young sons. I loved following along with the summer of reading, in which the boys each tried to complete 50 books. It was quite an an impressive goal and I was happy to cheer them on when they met it. And now, I know why their home is a soda-free zone. Plus, Amanda and Jason each have their own blogs. I fully expect the boys to follow suit very soon.

Guydads: The dads, who live in the San Francisco Bay area, blog about a variety of subjects, but what drew me to them initially was that they take great vacations, including an annual jaunt to New York City. They squeeze as many Broadway and off-Broadway shows as they can into a much-too-short amount of time. I really enjoy their New York trip reports, especially if we've seen some of the same things. Plus, they've invited me to see a show with them if I'm ever in the neighborhood. And I love the Bay area. Thanks, Guy dads!

Linus the Great: We can all use some cuteness in our lives, can't we? Linus was born at 26 weeks, on May 15, 2007, weighing only 1 pound, 9 ounces. According to his parents, the blog "exists to update his friends and family with the latest on Linus’s march towards world domination, which currently includes: napping, trying to get his toes to his mouth, cracking up to the tune of Yellow Submarine, and charming strangers. " Well, he definitely charmed me. While this blog isn't updated very often, I never get tired of going back and looking at the same pictures again and again. Even though we've never met, I consider him a friend.

Passion of the Dale: I don't know much about Dale except that he's from Canada and he's very nice about leaving comments on my blog. (Reason enough to throw a little love his way.) I don't always understand what he's writing about, but it's very intriguing and I want to know more. He has an unusual and somewhat mystifying cast of recurring characters, like Honeypot and Korean Bagel Lady. Plus, he has the greatest blog post labels I've ever seen, including this one: My head is only pounding slightly from last night and from thinking so hard about this post. I really need to browse through his archives!

The Tin Man: Tin Man, aka Jeff, is a legal editor and former lawyer who lives in Manhattan. Before you think that those two facts might make his blog a bit well, dry, think again. Tin Man's writing is thoughtful, funny at times, moving at other times, and always conversational. Sometimes he blogs about politics, sometimes about theatre or movies or tv or something that's in the news, or sometimes he just writes about slices of life in New York City, where he lives with Matt, his partner of nearly five years. I always enjoy stopping by to check out the conversation.

Finally, this is something I've wanted to mention for quite awhile. My award for the most unappealing blog name has go to The New York Times for its book blog, Paper Cuts. It's a nice blog and I know they were trying to be clever, but ewwww! Was Flesh Wound already taken?

Okay my anointed bloggers, go forth and spread some love of your own!
Posted by Esther at 10:14 AM

Thanks for the blog love!

(Actually, Matt and I have been together for nearly five years.)

Oops, sorry Jeff! I corrected it. Of course, I'm sure you and Matt will be together for eight years, and many, many years beyond that. I was just projecting!

Woo-hoo - thanks for the shoutout! I've never participated in anything like this, so it was fun to get the little love-blog picture. I'm going to show the boys tomorrow, and of course, I'm sure they'll be very excited by the idea of them one day participating in the blog world. :)

you read gaydads too? I think they were the ones that inspired me to actually do broadway marathons. I remember them seeing a ton of shows within a week and I was like. you can DO that? it's not insane? now I love jampacking the shows in into my week visits to NY! ha!

You're welcome Amanda! And you're never too young or too old to start blogging!

Hey Vance,
I forgot how I first found the dads - maybe through a link on All That Chat. But I was pretty amazed by their jampacked New York theatre trips and it was fun to read about everything they did. I like living vicariously through others!

While some people I know have broached the question of my sanity at seeing seven shows in five days, I've learned to ignore them. ;-)