A disappointing vote in New York 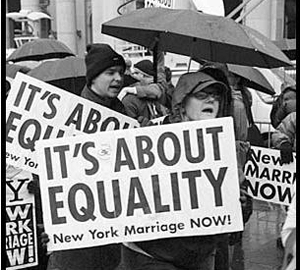 Another vote on gay marriage, another disappointment.

This time, from the New York State Senate, which defeated a bill that would have legalized same-sex marriage by a vote of 38 to 24.

I am so angry at the "arguments" (in reality, the scare tactics) that opponents of gay marriage use: it'll harm children and families and "traditional" marriage.

Yes, the "traditional" concept of marriage that once banned unions between black and white Americans, that once regarded women as the possessions of their husbands and families.

Do you know what harms families and children in the United States?

Do you see gays and lesbians on that list anywhere? I didn't think so.

The language used by the opponents of gay marriage reminds me of the Southern demagogues who used to whip people into a frenzy over what would happen if schools were integrated. I mean, if little black boys were allowed to sit next to little white girls in the classroom well, who knows where that might lead!

This is not a religious issue. You are entitled to your beliefs, as long as they don't impinge on the rights of anyone else. But I'm sorry, you are not entitled to enact your beliefs into law. I know people of deep faith and the ones I admire most live by the Golden Rule.

When my elected representatives vote, the only document I want them to consider is the Constitution of the United States. And I hope they believe that all Americans are entitled to equal protection under the law. I hope they understand that our laws are designed to protect the rights of minorities, not to impose the will of the majority.

I don't understand why same-sex couples who have been in a relationship for 5, 10 years or longer can't get married when any straight couple can show up at a drive-through wedding chapel in Las Vegas and tie the knot.

Allowing gay and lesbian couples the right to marry does not affect the marriage of any heterosexual couple. It's ludicrous and insulting to imply that it does.

What this vote does is tell gay and lesbian citizens that their rights aren't important, that it's acceptable to discriminate against them. Well, it's not acceptable.

In California we're signing a petition to put an initiative on the ballot in 2010 to outlaw divorce. I mean, c'mon - if we are going to "protect" marriage, let's REALLY protect it! You in?

Sorry for the late reply. I was in New York and then I've been sick. Anyway, I definitely agree. If you want to get serious about protecting "traditional marriage" you need to make divorce illegal!