When the show doesn't go on 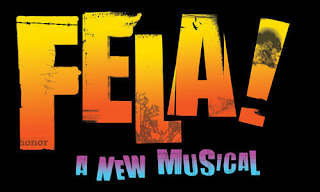 Apparently the phrase "the show must go on" doesn't mean anything to the Broadway musical Fela!

I was supposed to attend Sunday night's performance, which was canceled, producer Stephen Hendel told The New York Times, due to a "perfect storm" of injuries.

Well, here's my take on it:

I got to the Eugene O'Neill Theatre about 6:30 and was lucky enough to get a spot in the lobby on a freezing cold night in New York City.

About 10 minutes later, we were told there would be a short delay in letting us enter the theatre. One of the actors - not a major one - had injured his wrist and his understudy needed a little extra time on stage to rehearse.

For the next half-hour, we stood there, with the crowd outside getting larger and colder and more agitated. One elderly couple - I heard the man say he was in his 80s, - had to practically beg a theatre staff member to allow them to stand inside the lobby, where it was warm.

Finally at about 7:15, 15 minutes after curtain time, the same woman who told us the show would be delayed came out again to tell us that she was very sorry, but due to "multiple" injuries, the performance was canceled. (Hendel told the Times it was 7:10 but my watch said 7:15.)

Now, I don't understand how in the space of 30 minutes, one actor needing a little extra time to rehearse became "multiple" injuries that forced the cancellation of the show.

When I came into the lobby at 6:30, there was already an understudy listed for ensemble member Nicole Chantal De Weever. So the creative team knew that the problem was larger than one person needing to rehearse a role.

I suspect that the powers-that-be with Fela! were not being honest with us. I think they must have known when the first announcement was made that there was a real chance the performance would be canceled. Yet, they led us to believe otherwise.

I'm not trying to disparage the work of Broadway chorus members but this wasn't a case where an actor who played a main character couldn't go on and there was no replacement.

None of the three injured actors mentioned in the Times story even has a name in Fela! They're part of the ensemble. I know the show has very few speaking parts - it's mostly singing and dancing. Couldn't they have gone on with three fewer dancers? Would anyone have noticed?

Also, three injuries is a "perfect storm" in a cast of more than 20? Why wasn't Fela! better prepared for something like this? It's simply unprofessional. Either hire enough people - there are zillions of unemployed dancers in New York, right? Or change the choreography to make it less injury-prone. But don't sell tickets to performances and then cancel them.

I know there was some discussion earlier this year at the number of understudies in West Side Story but at least they had them - they never had to cancel a performance because there weren't enough Jets or Sharks.

What makes me angry is that if they had canceled at 6:55, I would have had time to see another show. I could have walked across the street to Chicago. But at 7:15, on a bitterly cold night, there was nothing else to do except go back to my hotel room. (If I'd known I wasn't going to see a show, I could have gone home early and saved the expense of a hotel room for Sunday night.)

Broadway is a brand and a very important one to the New York City economy. When something like this happens, it hurts the entire brand. Like 65 percent of Broadway ticket buyers, I'm a tourist. I can't come back for another performance of Fela! And I'm disappointed.

I know canceling a performance of a Broadway show - or any other show - is a rare occurrence. This is the first time it's happened to me in three years of theatergoing and I've seen probably a hundred shows in that time.

Still, tourists who are planning to see a Broadway show on a trip to New York need to feel confident that the show will go on. Today, I'm a little less confident of that.
Posted by Esther at 7:30 PM

How frustrating. I've never heard of anything like this happening before. I'd be upset, too. I hope you were refunded for the price of the ticket.

Well thankfully it doesn't happen often! I actually have to mail the ticket back to Telecharge, which I don't understand. They know I bought it and they know the show was canceled. Why we can't do this over the phone or online is beyond me!