Except for "Send in the Clowns," I went into the Broadway revival of Stephen Sondheim's A Little Night Music with pretty much a blank slate. 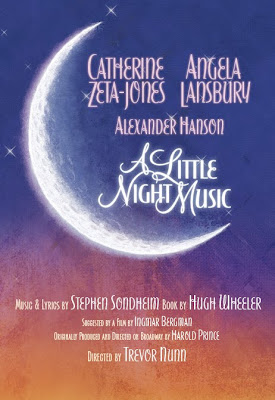 I panicked when I saw an unfamiliar name listed for the role of Fredrika Armfeldt on the understudy board at the Walter Kerr Theatre. I was afraid that meant either Angela Lansbury or Catherine Zeta-Jones was out.

Not to worry. The entire cast was in and the role of Fredrika, granddaughter to Lansbury's Madame Armfeldt and daughter to Zeta-Jones' Desiree Armfeldt, is alternated by two young actresses.

My ignorance meant that I didn't have any preconceived ideas about how A Little Night Music should look or sound or how the characters should behave. I only wanted what I hope for every time I go to the theatre - to be entertained, to be moved. And I was captivated.

First of all, it's an absorbing, romantic story of how we all yearn for love - from youth to old age, from a nobleman to a maid.

The characters are involved in various romantic entanglements in turn of the 20th century Sweden, which culminate in a weekend at a country house. The waltzes, the singers who shadow the main characters and the subdued lighting by Hartley T.A. Kemp give the musical a dreamlike, fairy tale quality.

The book, by Hugh Wheeler and based on the 1955 Ingmar Bergman film Smiles of a Summer Night, offers a look at love in its different stages - from the clumsy inexperience of youth to the reminiscences and regrets as we get older. The characters are so interesting and very funny - there's much more humor than I thought there would be in a musical based on a Bergman film.

Oscar winner Zeta-Jones, making her Broadway debut as actress Desiree, is beautiful - actually beyond beautiful, she's radiant. You can't take your eyes off her, yet she doesn't overpower any of her fellow actors. And she looks like she's having a great time.

Desiree is still a star, still able to attract men, but you get the sense something's missing from her life. She's warm and vibrant and so loving with her daughter, played at the performance I saw by the very sweet Keaton Whittaker.

This production has a seven-piece orchestra, and I can't say how A Little Night Music would sound with more musicians. But it was was exciting to hear the first strains of "Send in the Clowns." Zeta-Jones sings it in a way that's a lament: poignant and fits perfectly with the story.

Lansbury is wonderful as Madame Armfeldt, stern, wise and regal, who doesn't quite approve of her daughter or how things are done today. She takes charge of Fredrika while Desiree is touring. I could almost envision the musical as a grandmother's story to her granddaughter. (Ok, admittedly some things you probably wouldn't tell a a preteen girl.)

And what an absolute thrill to hear Lansbury sing, practically in front of me from my third-row orchestra seat. I was literally holding my breath during "Liaisons," in which she recounts some of her past relationships. This is my third time seeing her on Broadway but the first time I've heard her sing and it was an unforgettable experience.

I also enjoyed Englishman Alexander Hanson as lawyer Frederick Egerman, a gentle widower who may have made a mistake in taking a very young bride; Aaron Lazar as the self-important, womanizing officer Count Carl-Magnus Malcolm and Erin Davie as Charlotte, his long-suffering and conniving wife.

Newcomers Ramona Mallory and Hunter Ryan Herdlicka are Anne and Henrik, Frederick's wife and his son from his first marriage. Their performances are a bit over the top but accentuate their youthfulness, and I thought they were fun to watch. Herdlicka is hilarious as a lovesick seminary student. And Mallory is so bubbly as Anne, still a child despite her marriage.

And the score - gorgeous and witty and complex. It was fun thinking about connections to other Sondheim musicals. The group of singers and some of the songs reminded me of Sweeney Todd - not the lyrics themselves but the way they were styled, their rhythm.

A Little Night Music opened on Broadway in 1973, won the Tony for Best Musical and ran for 18 months. From what others have written, I gather that was a more lavish production in terms of the set and costumes and orchestration.

The revival, directed by Trevor Nunn, has a bare-bones set by David Farley to go along with its bare-bones orchestra. It originated at London's Menier Chocolate Factory, although the only holdover in the cast is Hanson. The Menier also has fewer than 200 seats and my guess is it played very differently in that setting.

Personally, I thought the set design and costumes, also by Farley, were fine. Neither seemed out of place for the time. My biggest concern was that I'd heard it had a nearly three-hour running time. But the time just flew by.

I don't know how this production of A Little Night Music compares to any other. All I can say is, it was daylight when I entered the theatre, dark when I got out. I felt like I'd been transported someplace for the afternoon. And I'd go back again anytime.
Posted by Esther at 9:30 AM

I'm glad you liked it! I still can't decide whether I want to push for seeing it or for Ragtime over the winter break...but ALNM is slowly picking up steam, and I think it may ultimately be my choice.

Incidentally, the original cast album is well worth tracking down--apart from the fact that the cast is very good, the orchestrations are really lovely. I mean, I'm sure it works, even works well, with the smaller orchestra, but the way the score is treated on the original album is really great.

This is lovely, Esther; I'm so glad you enjoyed it. I've been curious how newcomers would take to it -- I'm afraid my reaction is unalterably colored by memories of other productions I've seen. And Dorian hits it on the head -- I've been listening to the OBCR for 20 years, and the expectations that come with those orchestrations has its effect as well.

Also: Jonathan Tunick was at Feinstein's for Kate Baldwin's show last night. I wanted to go up and give him a hug for his gift to this show, but refrained.

Hey Dorian,
Thanks, I definitely want to get the original cast recording.

It's a tough choice. Personally, I enjoyed ALNM more than Ragtime, although I saw a very early preview of the latter. But I think overall Ragtime may have gotten better reviews. Also, I think because I'd read the book and seen the movie of Ragtime the story didn't grip me as much emotionally as I thought it would. But I may be the exception!

Is there any way you can go on a Wednesday or Saturday and see both?

I respect your opinion and this being my first time with ALNM I probably had different expectations than someone who knows it so well and is more musically inclined.

The next day I saw Wicked and it sounded terrific at the Gershwin. I'm sure if I'd seen a stripped down production with seven musicians practically no sets and plain costumes, I'd feel the same way.

I'm so glad you liked ALNM. It's Sondheim's most sophisticated romantic, adult show. It's good to hear the pov of a novice.

Don't wait to get that OCR - it's heaven.

Incidentally, Keaton is not technically an understudy but alternates the role with Katherine Leigh Doherty. I'm sure Katherine is just as great, but on the first preview, Keaton basically stole the entire show with her poise and ease.

I've seen the show twice here in Melbourne - the Melbourne Theatre Company in 1999 and Opera Australia earlier this year, which a full orchestra. I will be seeing this production in May 2010 (fingers crossed) and it will be interesting to see what I think of a eight piece, though I think the show itself could stand it, I'm not sure how that translates to a reasonable size theatre. That said, the set and lighting design sound much more interesting than the OA version which was a bit too basic, sheer curtains and a big revolve which didn't detract from the show but didn't exactly add to it. (And it was also in the State Theatre of Victoria, which was far too big for a show I think as more intimate than anything.)

I'm glad it's getting generally good reviews and I believe it's selling okay.

Thanks, Sarah. It was such an enjoyable afternoon. I still smile when I think about it. And sophisticated is a perfect description.

Well, there really isn't much of a set, just some basic furniture. But like I said, I think the costumes and the waltz music give you enough of an old-time feel. And these are people who are well off, comfortable, but probably not ostentatious. So I wasn't expecting opulence. And I liked the country scene in Act II, with the trees.

I know some critics do feel the lighting is dark. And it is in some of Angela Lansbury's scenes. But to me, that just added to the dream-like quality.

I'm keeping my fingers crossed for you! I think with the two stars it should continue to sell well.