A sweet moment at Superior Donuts

Before the curtain closes on 2009, I have one final memorable theatre moment to relate. It happened last night on Broadway, while I was a few hundred miles away. And it's one of the nicest moments of the year.

The next best thing to seeing a show myself is turning a friend on to a play or musical I've enjoyed. 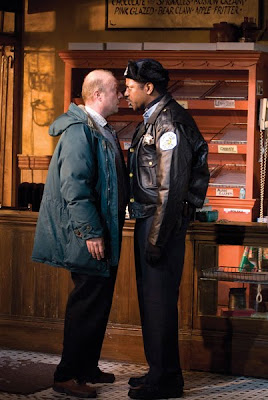 So when a coworker who was going to New York City with his wife asked for a recommendation, I was happy to suggest a few. And I was thrilled when they picked one of my favorites - Superior Donuts.

On Monday I tweeted James Vincent Meredith, who is terrific as Chicago police Officer James Hailey, that I was sending a couple of friends to see the play the next evening. He quickly responded, telling me to let him know if they wanted a backstage tour.

Well, I was floored by his kind offer. And of course they did!

After the show there was a brief talkback with the cast. Then Meredith took my friends onstage at the Music Box Theatre, where they got an up-close look at the set. Needless to say, they were thrilled. And they loved the play. And I am so jealous. (But in a good way!)

One of the joys of becoming a theatergoer has been a chance to see two productions on Broadway from Chicago's Steppenwolf Theatre Company, both of which I've loved, August: Osage County and Superior Donuts. It's taught me how much great theatre there is all over this country.

I've been so fortunate to see playwright Tracy Letts' memorable characters portrayed by an incredibly talented ensemble of actors. And as James Vincent Meredith demonstrated, they're an incredibly gracious group, too. I know why my friend Steve on Broadway sings their praises.

Sadly, Superior Donuts closes Sunday. But you've got six more chances to see this warm and witty play about how we relate to each other as individuals, as a community, as Americans. It truly touched me and I'm so glad it touched my friends, too.
Posted by Esther at 1:00 AM