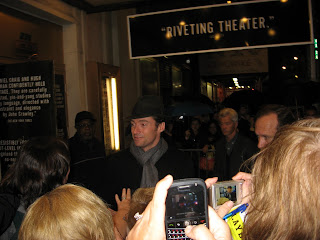 I'm not ashamed to admit it: I'm a fangirl. A part of me still finds it amazing that after I see a Broadway show, most of the time I can meet the actors and actresses whose work I've just enjoyed. (And it's not just the more famous ones. I'm thrilled to meet the cast of every show.)

So I can't end 2009 without mentioning some of my favorite stage door experiences of the year. And of course I want to thank the performers who took the time to sign my Playbill, talk to me or on a few occasions when I was brave enough to ask, pose for a picture.

Sadly, I did not get autographs from Hugh Jackman or Daniel Craig after A Steady Rain but I was smart enough to hand my camera to Steve On Broadway, who snapped some nice pictures of the man from Oz looking very jaunty in his gray scarf and fedora.

Among the other highlights:

James Gandolfini from God of Carnage. I'm a Sopranos fan, so this was exciting. Usually, if it's someone I know from TV or movies, I manage to say something along the lines of "loved you on this TV program or in that movie and it's so wonderful to see you on stage." This time, maybe because he came out so quickly after the play ended, I was tongue-tied. Gandolfini was quiet, although he did laugh when someone asked about a Sopranos movie. ("I don't think so.")

Neil Patrick Harris. This was completely unexpected. Apparently, NPH attended the same performance of Waiting for Godot that I did because I saw him going in the stage door. People were clamoring for autographs and he promised to sign when he came out - and he did, as well as pose for pictures. This was the day before he was hosting the Tony awards and I'm sure he had a busy schedule but he was exceedingly friendly and gracious.

Ernie Hudson from Joe Turner's Come and Gone. It was great meeting the entire cast but best of all was spending a few minutes listening to Hudson talk about it had been like the previous week, when the president and first lady were in the audience. He was clearly still excited about it. (Hudson said everyone onstage was temporarily blinded from cell-phone cameras going off when the Secret Service brought the Obamas to their seats for Act II.)

Steven Pasquale from reasons to be pretty. I saw this play in the afternoon on the day of the Tony awards. Pasquale's character is a creep and not very nice to his wife. In real life, Pasquale is married to Laura Benanti, who was hosting the Tony preshow. As he walked away with an assistant, I heard him inquire about her in a way that struck me as so sweet and caring. Quite different from the character I'd just seen him portray. Yes, I know it's called acting but the contrast just reinforced what a great job he did onstage.

Jessica Hynes from The Norman Conquests. Hynes played the frazzled Annie, who cares for her needy but unseen mother and desperately needs a break. I told her how much I enjoyed her performance, how it related to the circumstances of my life and really resonated with me. She asked me whether she'd "gotten it right." I assured her that she definitely had. And I was touched - and impressed - that she cared enough to ask.

Alice Ripley from Next to Normal. This was after her second show of the day and Ripley took a long time to make her way around the circle of fans. She was stopping to talk with almost everyone and I could tell some of the conversations were intense. My guess is that because she plays a woman struggling with mental illness, she meets a fair number of people who have a family member in a similar situation. And from what I could tell, she wasn't brushing anyone off but was taking the time to listen.

Catherine Zeta-Jones from A Little Night Music. In the past three years of going to Broadway shows I've met Oscar winners and Tony winners and Emmy winners. But when Zeta-Jones came out of the stage door, looking perfectly made-up and glamorous, I thought to myself, "That's a movie star." She signed autographs, acknowledged fans from Wales and and Scotland who'd come to see her, and in minutes, was whisked away by a waiting SUV, leaving some Hollywood glitter in her wake.

Special bonus celebrity sighting - While I was waiting for the cast of A Little Night Music, I saw an elderly man being helped into the front passenger's side of Zeta-Jones' SUV. It was her father-in-law, 93-year-old Kirk Douglas! I wanted to rush over and tell him about the key role he played in my life, but I resisted. Still, it was awesome to see that unmistakable profile. (And he blogged about going to see ALNM on MySpace!)

Sarah Rosenthal from Ragtime. Sarah, who's 13 and making her Broadway debut, was very sweet at the stage door. She signed my Playbill and asked me, with all the seriousness and polish of a seasoned performer, "So, where are you from?"

In an interview with the Baltimore Sun, Sarah talked about how she spent weeks practicing her signature to make it distinctive. "There have been so many times that I've waited outside a stage door in the cold to get someone's autograph," she says. "It's exciting to think that now, someone might want my autograph."
Posted by Esther at 1:00 AM

I love reading cute stage door stories. There's nothing wrong with being a fangirl. I met Neil Patrick Harris in the 90s after seeing him in RENT. Back then, he was still Doogie Howser to everyone. He was a sweet guy.

Great stories, Esther. Thanks. What most gets me is that after a long day of work, all I want to do is go home and veg. I can't imagine having to be friendly and gracious to a horde of fans night after night. And my job isn't nearly as intense or exhausting as theirs. Just shows how truly gracious they are.

Thanks Linda, thanks Todd!

Hope I get to see Neil Patrick Harris on stage someday! I think he was with his partner and they could barely take two steps up the street without NPH being stopped for an autograph. Definitely a sweetheart!

I totally agree, Todd. And sometimes it definitely is a horde of fans! But that connection between actor and audience is so unique to the theatre and part of what makes it so thrilling for me.

Excellent fangirling Esther! I think I mentioned how much I loved Estelle Parsons in August: Osage County when it was here and I got to briefly accost her and probably scared her a bit. In other news, I am now scarred for life after hearing Harvey Fierstein in Fiddler on the Roof. Bad bad Harvey!

Hey anonymous! I think Harvey Fierstein has a naturally raspy voice. And if he's hoarse on top of it, oy vey! I didn't get a chance to see him in Fiddler on the Roof, but I've seen him in Hairspray and A Catered Affair. Topol was still in the Fiddler tour when I saw it last year.