My year of living theatrically - 2009 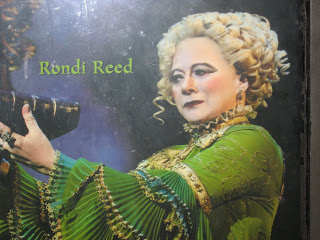 My year of living theatrically, 2009 edition, has come to a close. I saw 39 shows this year - 24 plays and 15 musicals - most of them on Broadway. (I realize that I missed out on a lot of great theatre off-Broadway and a lot closer to home, so I'll have to work on that in the future.)

I'll get to my picks for the year's best in another post but first, here's a rundown of some noteworthy events:

That means out of 40, there are only 9 that I have yet to visit: the Ambassador, American Airlines, August Wilson, Cort, Golden, Henry Miller's, Longacre, Lunt-Fontanne and the Majestic. Not bad considering I only started in April 2007! First-time visits this year included Circle in the Square: So round! The Gershwin: Such sightlines! The Helen Hayes: So tiny!

Usually I buy my tickets in advance but this year there were two occasions when I didn't, so I ended up at TKTS in Times Square. The play-only line isn't bad but I don't know if I'd want to stand in the much longer plays and musicals line. In many cases, you can get discounts online that are just as good and you'll have your tickets before you leave home.

(Plus, it's kind of sad to listen to people standing in line who have no idea what they want to see or what anything is about, save for the shows that they won't find at TKTS anyway.)

In my case, I took a chance on Neil LaBute's play reasons to be pretty and ended up really enjoying it, especially the performances from Steven Pasquale and Thomas Sadoski as two blue-collar friends. And I finally saw The 39 Steps on Broadway. It's still as funny and clever as it was in Boston in 2007.

I took in Lincoln Center Theater's production of Joe Turner's Come and Gone on Broadway (missed the Obamas by a week!) and Fences at Boston's Huntington Theatre Company. They were a great introduction to Wilson's absorbing characters and compelling storytelling. Now, I want to see the other eight plays in the late Tony and Pulitzer winner's cycle chronicling African-American life in the 20th century.

In October, I attended a staged reading of The Laramie Project: Ten Years Later by students in the Brown/Trinity Rep MFA program. The play was presented on the same night in 150 venues across the country and around the world on the 10th anniversary of the death of Matthew Shepard, a college student who was murdered in an antigay hate crime. The performances were memorable and the experience made the words "theatre community" seem so real.

My claim to theatergoing fame.

In February, I saw Fiddler on the Roof at the Providence Performing Arts Center with Chaim Topol as Tevye. I also saw Topol as Tevye in Tel Aviv in 1998, in a Hebrew production, which was my first time seeing Fiddler on the Roof in any form. (At that point, I'd never even seen the movie.) So now I can say that I've seen an actor play the same role on stage in two different languages in two different countries, on different continents and in different centuries!

Got a little more Wicked.

Ever since I saw the musical in January 2007 in Providence, I've wanted to see it on Broadway. I finally accomplished that goal for one reason - Tony-winner Rondi Reed was playing Madame Morrible and I loved her in August: Osage County. Well, she was terrific. Seeing Reed play a completely different character - with a completely different accent - only increased my admiration for her.

Right back where I started from.

Since the Sunday night performance of Fela! that I was going to see got canceled, (another first) that meant Wicked turned out to be my final show of 2009. How fitting that my third year of theatergoing ended the same way my first year began.
Posted by Esther at 9:00 AM

its been a great year, hasn't it? your wrap up of your experiences is similar to mine...lots of firsts, lots of singular experiences...its great to hear

Thanks for the comment. It has been a great year of theatergoing. And since I'm relatively new at it, every year I discover new playwrights and composers I love, go to theatres I haven't been to before. Hope it's like this every year!