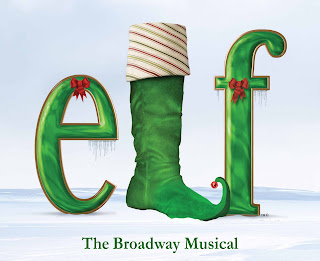 Elf, at Broadway's Hirschfeld Theatre
Gratuitous Violins rating: *** out of ****

I hadn't seen the movie Elf before taking in the musical version on Broadway but I was fairly certain of one thing: it would only be as good as its Buddy.

He's the baby who's accidentally transported to the North Pole after crawling into Santa's sack of gifts at an orphanage. He grows up to be Will Ferrell, a giant among elves but kind of a washout as a toymaker.

Well, Sebastian Arcelus won me over as the musical's Buddy. He's adorable - a big, overgrown kid in his green elf suit. He has a winning smile, a sweet singing voice and tons of charm.

I love a story set in New York City, and that's where Buddy goes at Christmastime when he learns that his human father is alive. I'm guessing the book, by Thomas Meehan and Bob Martin, follows the 2003 movie closely but they've added some clever current references.

Composers Chad Beguelin and Matthew Sklar have written a catchy, poignant score for Elf that's just as fun as their songs for The Wedding Singer. They capture the excitement of the holiday as well as a son's yearning for his father. And as someone who loves big Broadway dance numbers, I still smile when I think about Casey Nicholaw's exuberant choreography.

I liked Mark Jacoby as Buddy's long-lost dad, Walter Hobbs. He's a busy, brusque man who works at a children's book publisher and doesn't have much time for his family. Jacoby makes him just disagreeable enough without going over the top.

Beth Leavel and Matthew Gumley are perfect together as Emily and Michael, Walter's neglected wife and young son, who welcome Buddy into their lives. They have a nice duet in "There Is A Santa Claus." Amy Spanger is cute as Buddy's love interest, Jovie, whom he meets at Macy's. And it was great to see George Wendt as Santa Claus.

There's not much - actually, there's not any - suspense in Elf. But that didn't matter. While some shows geared toward kids have left me a little bored, I was into this one all the way, right down to the final unsurprising special effect. And this lighthearted musical sends a strong message about the importance of family.

(My only complaint: the product placement for Apple that even I, as a loyal customer of more than 20 years thought went overboard.)

Elf was the final show I saw in New York City in 2010. While it wasn't life-changing, the musical ended my year of Broadway theatergoing on a very enjoyable note.
Posted by Esther at 9:55 AM