Lowering the curtain on 2010

All the reviews have been written and the curtain has dropped on my year of living theatrically, 2010 edition.

Unfortunately, it was not a record-setting year. I saw fewer shows than I did in 2009, since I wasn't able to get to New York in the spring and I didn't make it to Boston at all. But it's quality not quantity, right? And I still saw a lot of memorable theatre.

Before I get to the highlights in an upcoming post, a few odds and ends: 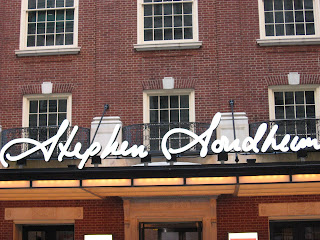 I checked two more Broadway theatres off my list: the Longacre and the Cort. There are only six left that I've yet to step inside: Ambassador, American Airlines, August Wilson, Golden, Majestic and Sondheim. The Longacre reopened in 2008 after a two-year, $12-million renovation by the Shuberts, and it's beautiful. The Cort, well, I hope it's next on the list for a facelift. And speaking of the Sondheim, when are they going to dot the i? Has anyone else noticed that it's still missing?

Among the seat-selection lessons I learned this year: just because the front row in a particular theatre is fine for one play, that doesn't mean it'll be fine for another play. I sat in the front row at the Friedman for The Royal Family and it was perfect. But I was a little too close for The Pitmen Painters. The stage seemed to be higher and deeper. I never realized the dimensions could change that dramatically!

Another question: Does the director ever sit in the audience to make sure everyone can see from every vantage point? A row of speakers blocked my view of the actors' feet in Xanadu. Not good in a musical with roller-skating dancers. A chair blocked my view for a couple of scenes in The Pitmen Painters and a piece of the set that popped up from the stage did the same during Act II of A Free Man of Color at the Beaumont. (To be fair, I had changed my seat at intermission, moving down to an empty spot in the front row. There's no leg room in the Beaumont, even in the orchestra.) 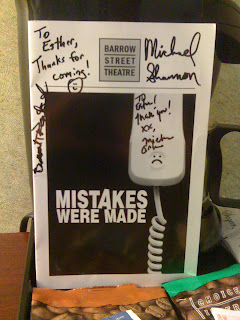 As always, I had many wonderful stage-door experiences. Among them: Saycon Sengbloh of Fela! graciously took me onstage at the O'Neill.

I tracked down Tony winner Douglas Hodge in a bar after La Cage aux Folles and he was great, taking a few minutes to talk to me and sign my Playbill. I consider that one of my more intrepid stage-door adventures.

I met Michael Shannon from Mistakes Were Made at the Barrow Street Theatre. He was so nice, asking me where I was from, how I travel to New York and what other shows I was seeing. He asked me my name so he could personally inscribe my program. (I think I startled him because "Esther" is his character's secretary in the play). And he even drew a little smiley face for me!

Another first: I met a playwright! David Hirson was at the stage door at La Bete, a work I really loved and I got to tell him so. I also had the opportunity to renew my acquaintance with David Hyde Pierce. I told him how much I enjoyed him in Curtains and he showed me that he was wearing the show jacket from the musical - which I thought was sweet in a theatre geek kind of way.

By far the rudest audience behavior I witnessed this year was at Trust, at the Second Stage Theatre off-Broadway.

I was in the third row and at the beginning of Act II, a woman sitting on the aisle snapped a couple of pictures of Zach Braff. It was so brazen, as well as rude and dangerous to the actors. It's a small theatre, too, 327 seats. So it's not like no one would notice.

I'm pretty sure that if she'd waited until after the play, he would have posed for a picture with her.
Posted by Esther at 12:45 AM

They used Stephen Sondheim's signature for the theatre, and I don't think he dots the i...maybe that's why they haven't added it?

That sounds like a logical explanation. Thanks for the comment! I'm hoping to see the inside of the Sondheim this spring, for Anything Goes.