Mistakes Were Made, at the Barrow Street Theatre off Broadway
Gratuitous Violins rating: *** 1/2 out of ****

I've never seen anything quite like the virtuoso performance Michael Shannon delivers as a would-be Broadway producer in Mistakes Were Made.

Craig Wright's witty, frenzied satire comes to New York from Chicago's A Red Orchid Theatre. In 95 minutes it takes us through a day in the life of Felix Artifex, who's desperately trying to mount an epic play about the French Revolution penned by an unknown Midwestern author.

If you love theatre and know anything about the perils of Broadway, I bet you're smiling already.

From Tom Burch's set design it's clear that this is not some high-powered dealmaker. Felix operates out of a dimly lit, shabby office with a worn desk and chair, scripts strewn around the floor and heated by an old-fashioned steam radiator. There are old Broadway posters and I recognized a framed photo of Larry Hagman on the wall. 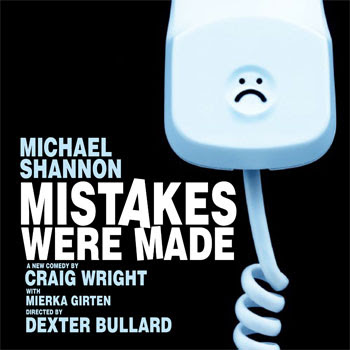 Felix spends most of his time alone - well, almost.

An eternally patient but rarely seen secretary, Esther, played by Mierka Girten, announces his calls. She remains calm no matter how agitated he gets.

And there's an aquarium with one very plump, wide-eyed fish named Denise, in whom Felix confides. Puppeteer Sam Deutsch does a great job manipulating Denise, making her a character in the play.

As Felix, Shannon is on the phone almost nonstop. It's amazing to watch him juggle phone calls, sometimes several at a time, stretching from the Midwest to the Middle East. I swear he had me believing there was someone else on the other end of the line each time.

Felix must talk to nearly a dozen different people including a movie star, the playwright, an investor, a theater owner, an agent, a director, his ex-wife, an American military officer and several people involved with a shadowy money-making scheme to move sheep through a war-torn country.

And everyone gets a different approach - flattering the hot young movie star he's wooing, gently but firmly trying to persuade the playwright to create a bigger part for the actor, incensed with the theater owner who tries to back out, deferential to the investor. (I loved how he kept reassuring the writer: "You're the artist," all the while trying to rewrite the play for him.)

What's remarkable to watch is how adeptly Shannon handles all of this. He's moving all the time - running his hand through his hair, feeding his fish and effortlessly changing his tone of voice while switching among callers.

This was my first time seeing one of Wright's plays but I'm familiar with his work from such television series as Brothers and Sisters, Lost and Six Feet Under. He seems to know all of the players and egos involved in show business.

While there's nothing particularly startling in Wright's observations about the difficulty in putting on a Broadway show, he's written a tremendously entertaining look at the intersection of art and commerce.

Mistakes Were Made is a character study and Felix Artifex is quite a character. I'm thinking there aren't a lot of small-time producers like him around today. It's a bit of a stretch to believe that he could ever actually mount a Broadway show.

Still, Shannon elevates this play, making Felix utterly sympathetic and memorable. And in Mistakes Were Made, he's giving a Tony-worthy performance, even if it isn't eligible for one.

An Oscar nominee for Revolutionary Road and currently in the HBO series Boardwalk Empire, Shannon is gaining some well-deserved national recognition. This is a great opportunity to see him up close.
Posted by Esther at 9:40 AM