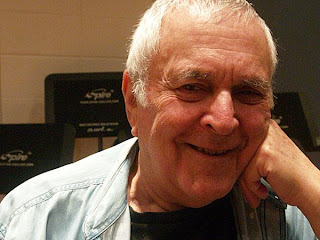 Today marks another milestone for my favorite podcast, the American Theatre Wing's Downstage Center. This week's interview, with composer John Kander, is number 300.

At the time of my first trip to Broadway, in 2007, I was pretty much a blank slate when it came to theatre. Four-time Tony winner Audra McDonald? I would have shrugged. But somehow I found my way to Downstage Center, then a co-production of the Wing and XM Satellite Radio.

The interviews with actors, directors, playwrights and designers were my ticket to the world of theatre on Broadway and beyond. I'd download the podcast from iTunes and listen at the gym or in the car.

The hosts, XM Satellite's John von Soosten and the Wing's executive director, Howard Sherman, were great at making the shows relaxed and conversational. Their questions were insightful and the guests weren't rushed - they were given plenty of time to talk about their lives and careers.

For example, I now know that at age 16, McDonald played Eva Peron in a Fresno, Calif., dinner-theatre production of Evita. One of Nathan Lane's first professional acting jobs was in a musical about the history of New Jersey, called Jerz. And Jan Maxwell got her Equity card after being cast as the understudy for the role of Lily St. Regis in a bus-and-truck tour of Annie.

It's been great to find an interview with someone whose work I've just seen onstage. I can't pick a favorite - every program has an anecdote or a quote that sticks with me, and I've shared a few of them on my blog. But the one with Marian Seldes is a gem. I even had a chance to tell her how much I enjoyed it.

Since August 2009 Downstage Center has been solely a Wing production, with Sherman handling the interviewing. (On the Wing's blog, he writes about the program's history.) I hope it'll continue, with his participation, after he steps down as executive director next year.
Posted by Esther at 7:30 PM

Monday mornings are always a little more bearable knowing there's a new episode of Downstage Center, which I can listen to on my commute downtown to work. It's opened my eyes to people I was unfamiliar with, such as Athol Fugard and Teresa Eyring. Happy 300th episode!

Yeah, it's amazing to think how many of the interview subjects were totally unknown to me just a few years ago. I've watched a few Working in the Theatre programs, too, and they're also great.

It sounds like a great podcast. I may have to have a listen. Is there ever enough time?! Happy New Year!

Hey Dale, you can listen on your way to work or wherever. That's the beauty of podcasts - they're portable! Anyway, Happy New Year! Hope's fun and healthy and filled with theatre.