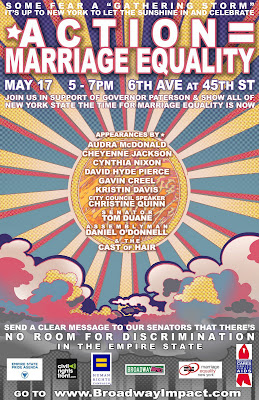 I wish I could be at 45th Street and 6th Avenue today in New York City for the rally in support of marriage equality but unfortunately, I'll only be there in spirit.

The event is being organized by Broadway Impact, which describes itself as "a community of actors, directors, stage managers, producers and fans - really anyone who's ever been in, worked on or seen a Broadway show." (Hey, that includes me!)

And it's coming at a crucial time.

Last week, New York's Assembly passed a bill legalizing same-sex marriage but the state Senate is just short of the votes needed to approve the legislation. Gov. David Paterson has been a vocal supporter of the rights of gay and lesbian couples to marry.

I'm especially thrilled that the cast of the current Broadway revival of Hair, spearheaded by Gavin Creel, is participating. It seems so fitting. The 1960s was a decade in which we expanded our idea of equality to include more Americans and young people were at the forefront of the civil-rights movement.

I like the way New York Times columnist Gail Collins put it last November, right after the election. The baby boom generation, she said, deserves a round of applause.

"The boomers didn’t win any wars and that business about being self-involved was not entirely unfounded. On the other hand, they made the nation get serious about the idea of everybody being created equal."

While we've made a lot of progress regarding equality since the 1960s, we're not done until everyone's rights are protected - and that includes the rights of gay and lesbian Americans.

Speaking of marriage, a belated mazel tov to David Hyde Pierce, who's scheduled to participate today. He married his longtime partner, Brian Hargrove, in California last fall, during the brief window when it was legal, before the state's voters passed Proposition 8.

Interviewed afterward, Hyde Pierce talked about how fundamental civil rights are not negotiable: "We’re not trying to force anything on anyone. We’re trying to go about our lives and live them the best that we can."

Update! Here are some quotes I found from speakers at the rally, via Twitter:

"To those who oppose gay marriage ... This isn't about you any more than a woman's right to vote was about men."

"Our marriages will not diminish you. The only thing that diminishes you is denying us our civil rights."

"I came here seeking justice. ... We are not attacking anyone's religious beliefs."

Gov. David Paterson
Posted by Esther at 1:15 AM

A friend of mine lives in NYC and I think he's going to this rally. I saw him put in an RSVP on Facebook, though I haven't talked to him about it. I wish I could go...

Hey Amanda, I'm with you! Wish I could be there, too. I hope your friend goes and reports back. Hopefully there'll be video posted later on the Broadway Impact site.