Why didn't somebody tell me about this! I just found the BMI Workshop Songbook Podcast, featuring Broadway notables singing songs from musicals in development. (Okay, maybe somebody did tell me and I forgot.)

I definitely have to go to iTunes and download the entire series even though I already have about 200 podcasts I haven't listened to yet. 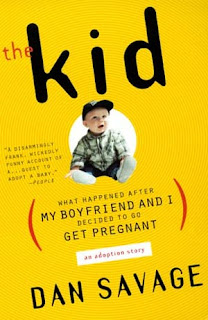 I found the podcasts because I was looking for information about the new musical The Kid, based on the book by Dan Savage about his effort to adopt a child with his partner, Terry Miller. While I was following Sarah's tweets Saturday from Wall to Wall Broadway, and wishing I were there, I noticed that she mentioned hearing songs from The Kid, so I did some research.

It turns out the musical, with a book by Michael Zam and music and lyrics by Andy Monroe and Jack Lechner, is going to be presented next spring as part of the 2009-2010 season by The New Group, a New York theatre company that's new to me.

I have to admit I've never heard of any of the people involved with this project. But they won the 2009 BMI Foundation Jerry Bock Award for Best New Musical. That's promising, right?

On the BMI blog, you can listen to an interview with Monroe and hear Cheyenne Jackson sing the title song. Just scroll down to March 14, 2008, and click on the link.

The song is funny in a self-deprecating kind of way and the lyrics definitely embody Savage's wit. It's also interesting to see how passages from the book - Savage's tongue-in-cheek rationale for wanting a child - are turned into song lyrics. Some lines, I think, are pretty much word for word.

As I mentioned before, I was a little skeptical that The Kid would work as a musical. I really liked the book - it's a very heartwarming story and Savage is a terrific writer. But I wondered how some of it, especially the more tension-filled parts, would translate into song.

The more I think about it though, the story is so inherently dramatic. Whether you're gay or straight, the adoption process seems like a journey riddled with frustration and anxiety, marked by moments of great hope and excitement contrasted with sadness and despair.

Savage definitely brings home those contrasting emotions and he handles them with a great deal of humor, compassion and poignancy. Hopefully the musical will do the same.
Posted by Esther at 9:01 AM

Yeah! This is one musical I didn't think would actually happen. Listen to the song and let me know what you think.

I'm stoked for this combination of two things I love - Dan Savage and musical theatre. Thanks for sharing this Esther :)

You're welcome Emily! It'll be interesting to see who they get to play Dan because, of course, we've all seen him on tv and know what he looks and sounds like. Hope you can make it to New York next spring. Maybe we can see some shows together!

I could have done WITHOUT those songs from The Kid at Wall to Wall Bway.