The family that writes together

During my trip to Borders today I picked up a copy of Billie Letts' latest novel, Made in the U.S.A., which just came out in paperback.

(I said on Twitter that 90 percent of the cds and dvds are gone. I think it's more like 99 percent. Fewer reasons to keep my Borders Visa. I hope they can hold on because I don't like buying online. I enjoy leaving my apartment and browsing in an actual bricks-and-morter store. Sigh.) 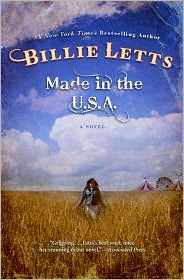 Anyway, this is the book that Letts dedicated to her late husband, Dennis Letts, whom she called "my Broadway star." Dennis Letts played the role of family patriarch Beverly Weston on Broadway in son Tracy's Pulitzer and Tony-winning August: Osage County until shortly before he passed away, in February 2008.

Made in the U.S.A. tells the story of 15-year-old girl and her 11-year-old brother in Spearfish, South Dakota, who embark on a journey in search of their father after their guardian falls dead in a Wal-Mart. (Oddly, a Wal-Mart also plays a role in one of Letts' previous novels, Where the Heart Is. Hmmm.)

The paperback edition has an interview with the author and Letts is asked whether there are parallels between her novels and her son's plays. Here's what she had to say:

"Yes, in that we tend to write about nontraditional families. In his first two plays I would tease and tell him that the characters in his work ended up naked or dead. (Not too much of a stretch, really.) But in his last three plays, he's strayed away from violence and carnage. Now it seems I've begun working in a darker vein than he is."
Posted by Esther at 8:30 PM