Boston's SpeakEasy Stage is getting some great New England premieres next season. The theatre will present both [title of show] and Adding Machine.

I really wish I'd been able to see [title of show] on Broadway. It only lasted a few months at the Lyceum Theatre. I know there was some discussion about whether this love letter to musical theatre was too insiderish to have wide appeal. 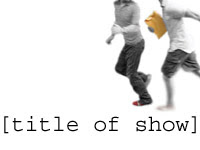 Since I've watched some of The [title of show] Show videos I kind of feel like I know Bowen, Bell and their castmates, Heidi Blickenstaff and Susan Blackwell, all of whom play themselves. It'll be strange seeing someone else in those roles. 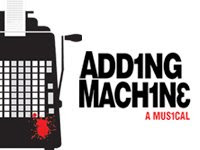 Adding Machine, on the other hand, is a much more somber musical. Based on a 1923 play by Elmer Rice, it's about Mr. Zero, an accountant who, after 25 years with the same company, learns that he's going to be replaced by an adding machine. In a moment of rage, he murders his boss.

The musical features a score by from Joshua Schmidt and a libretto by Schmidt and Jason Loewith. It opened off-Broadway in 2008 at the Minetta Lane Theatre to good reviews. Among those who raved about it was my fellow blogger Chris, at Everything I Know I Learned from Musicals.

I remember reading about Adding Machine and wishing I'd gone to see it. It sounds dark and moody, a bit like me. :-)

Oh Dale, I bet behind that dark and moody exterior lies a very cheery and sunny person! :-)

I do enjoy a dark and moody show myself from time to time and this one was supposed to be very good. Of course, I also like light and funny, too. It's all about balance, in theatre as in so much else.