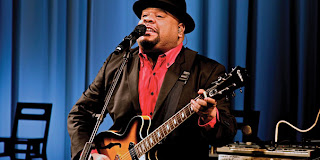 Fans of Passing Strange who can't get to New York City this weekend will have to wait a bit before watching the film of the 2008 Broadway musical.

PBS has acquired the rights to Spike Lee's film and plans to show it in 2010 as part of the Great Performances series. But this Variety story says the producers are exploring a limited theatrical release in late summer or early fall.

Lee has been making the rounds of the festivals with his movie. Earlier this year, Passing Strange was shown at Sundance and tomorrow, it's being screened in New York as part of the Tribeca Film Festival.

At Sundance, the movie garnered a pretty enthusiastic review from film.com:

"Spike used 14 cameras at once to capture the action like it's never been done before. Amazingly, you never see a camera you weren't meant to see. Intimate shots were gathered in gorgeous high-definition over the course of three shows and seamlessly edited together. It's a technological triumph as well as an artistic one."

While I'm glad someone bought the rights, I'm a little disappointed that Passing Strange won't get a big theatrical release. Even though it's a fairly intimate show, I'd still rather see this rock concert/coming of age story at my local multiplex, larger than life.
Posted by Esther at 12:15 AM

I'll be looking forward to it since I'm not smart enough to have seen it live.

Dale, don't sell yourself short. You are very smart! Not everyone can see everything. I know I can't! I just wish Passing Strange had gone to a distributor who would have given it more of a theatrical run because I think it would be more impressive on a big screen with surround sound.