Huntington lines up an all-American season 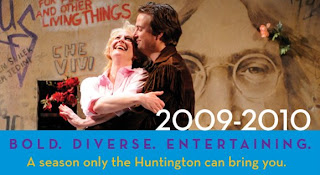 I've been waiting for Boston's Huntington Theatre Company to complete its schedule for next season and the final two shows have been announced: Craig Lucas' Prelude to a Kiss and Arthur Miller's All My Sons.

Both All My Sons and Prelude to a Kiss have had recent Broadway revivals. Unfortunately, I didn't have a chance to see either one, so hopefully I can catch up. (I have seen the movie of Prelude to a Kiss, with Meg Ryan and Alec Baldwin, and I thought it was kind of sweet.)

I know British director Simon McBurney came under some criticism for his interpretation of All My Sons. The Huntington production is being helmed by David Esbjornson, who collaborated with Miller at the end of the playwright's life, so this will probably be a more faithful presentation.

I'm also interested in seeing Fences, because it's a classic. And Becky Shaw, which was directed off Broadway by Peter DuBois, the Huntington's artistic director, garnered rave reviews. It was also a finalist for this year's Pulitzer Prize for Drama, which described it as "A jarring comedy that examines family and romantic relationships with a lacerating wit while eschewing easy answers and pat resolutions."

Apparently, this is the first season in the Huntington's 27-year history to be comprised entirely of American plays. It does seem like a nice mixture of diverse voices and themes and different periods in American history.

DuBois said, "Arthur Miller and Craig Lucas felt like the right two voices to complete a season designed to reflect a compelling range of American writing. From classics and contemporary masters to new voices, each play explores diverse viewpoints of the American experience."
Posted by Esther at 12:30 AM