Always something new to do in New York

Okay, I don't actually spend every moment of my New York City trips in Broadway theatres. It's an immensely walkable city with more things to see and do than probably any other city I've ever been in. So here's a rundown on my Memorial Day weekend:

Breaking the curse of the Jacobs Theatre stage door 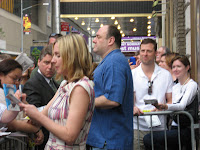 On my two previous outings to the Jacobs, to see Frost/Nixon and The Country Girl, I was spectacularly unsuccessful in getting my Playbill signed. So I wasn't getting my hopes up for God of Carnage. But surprise - James Gandolfini came out pretty quickly, followed by Hope Davis and Marcia Gay Harden. They were all very gracious. Gandolfini was quiet but laughed when someone asked about a Sopranos movie. ("I don't think so.") Sadly, I missed out on the Holy Grail of stage-dooring, getting everyone in the original Broadway cast of a show to sign my Playbill. Jeff Daniels made a hasty exit. Hope Davis said he had out-of-town guests. Well, okay. Three out of four is 75 percent.

Ninth Avenue (aka Hell's Kitchen) is my favorite street for eating in New York. Just a couple streets over from the bustle of Times Square, it's like another world. The sidewalks aren't nearly as packed with tourists and it's more like a regular neighborhood. It also has dozens of tiny and not-so-tiny restaurants serving up every type of food you could possibly imagine. I've eaten at half a dozen different ones and they've all been great. This time, I went with my friend Chris and his entourage to the Zen Palate - my very first Asian vegan restaurant, where I had some delicious whole wheat noodles with stir-fry vegetables. And no one looked at me funny when I asked for a fork - because I am chopstick-impaired.

Sarah and Kari invited me to join them on a walk across the Brooklyn Bridge on a beautiful, sunny Memorial Day. Now I can say I've done it in both directions. It was very crowded and you've got to watch out for bicyclists and I should have put on some sunscreen. But it's such a fun walk with great views. As I remarked to Kari, what a photogenic bridge! Look at her pictures and see if you don't agree. That day, we rode the subway, walked, took the water taxi and a land taxi. Just about every mode of transportation except a helicopter ride over Manhattan. Okay, not sure I'm up for that but someday I would like to take one of those horse-drawn carriages around Central Park. 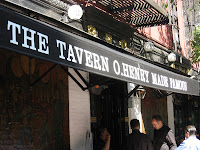 I'm not a huge fan of short stories but I do love two that I remember reading in middle school or high school - The Ransom of Red Chief and The Gift of the Magi. When Sarah led us to lunch at Pete's Tavern, little did I know that I'd be stepping into literary history. New York City's oldest continuously operating bar and restaurant is the very spot where Mr. William Sydney Porter, better known as O. Henry, wrote The Gift of the Magi in 1905. His booth is set up as a little shrine. Made me want to buy a pocket watch and grow my hair long so I can get some fancy combs! Pete's Tavern, on East 18th Street near Gramercy Park, has been opened since 1864 and it stayed open during Prohibition disguised as a flower shop. If you go, I highly recommend the grilled chicken salad.

Relaxing in a lawn chair in Times Square 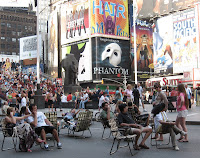 I got to New York on Sunday of the holiday weekend, the first day of the city's experiment closing Times Square to traffic. And it was pretty neat to be able to walk down the middle of Broadway. But I had to laugh when I came back from my excursion on Monday and saw people sprawled out on lawn chairs and chaise lounges that had been set up in the street. It looked like a massive installation of performance art. How incongruous! A little bit of suburbia in the heart of the city. I saw a sign inviting other chair manufacturers to display their furniture. I'm hoping when I go back this week, there'll be Barcaloungers.
Posted by Esther at 10:30 AM

Love your descriptions of NYC and things to do there. I have yet to walk over the Brooklyn Bridge. I think I'll make that a priority for my next visit. I like Hell's Kitchen a lot as well. I will definitely try your restaurant suggestions,too. Especially the tavern where Gift of the Magi was written. I LOVE that story. I read it every year at Christmas time. Thanks so much for sharing all this wonderful information. And of course, congrats on getting your playbill signed. I didn't even realize this was a possibility. I have so much to learn. LOL!

I am anxious to go back to NYC and reading your posts makes me want it more. I figure if I keep reading you, by the time I get back, I'll know just where to go and what to do.

Thanks Pam and Sandy. Luckily, I have lots of friends who live in New York or visit often and they've been great tour guides!

I'm such a fangirl - I love going to the stage door after a show and getting my Playbill signed. I've had a few disappointments but most of the time, the actors are incredibly gracious. It's fun to meet them and tell them how much I enjoyed their performance.