I can't believe my visit to Minneapolis is only days away. One of the things I'm most looking forward to in the Twin Cities next weekend is a chance to see the Mississippi River. 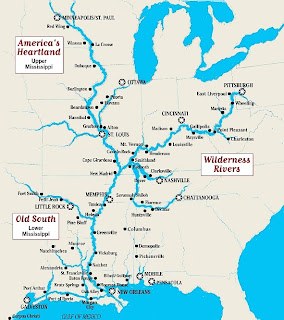 Even though I've been a lifelong American history buff, I've never seen the body of water that has played such a great role in our nation's history and popular imagination - in music and literature and theatre.

(Since I've been to California, I guess technically, I've flown over the Mississippi River, but I don't really think that counts.)

The Mississippi, the second-longest river in the United States, starts its journey at Lake Itasca, in northwestern Minnesota, and flows 2,340 miles to New Orleans before emptying into the Gulf of Mexico.

Like most Americans who didn't actually grow up near the river, I probably first became aware of the Mississippi in school, when I learned about the Louisiana Purchase. In 1803, Thomas Jefferson negotiated the purchase from France of a vast swath of land west of the river, about a quarter of what comprises the United States today.

In high school, I read Mark Twain's Adventures of Huckleberry Finn. While the novel, published in 1884, has been controversial because of its depictions of black people and use of racial epithets, Huckleberry Finn is noteworthy for its description of life along the Mississippi. Jim, the escaped slave who accompanies Huck on his journey down the river, has been criticized as a stereotype but also praised as a heroic and ultimately sympathetic character.

Two recent novels put a new spin on the story: Finn, by Jon Clinch, and My Jim, by Nancy Rawles.

In 1999, a television and radio series produced by the Smithsonian and aired on PBS, called River of Song, documented all of the different styles of music you can hear along the river. It's pretty amazing to consider: from rock 'n' roll in Minneapolis, soul in Memphis, bluegrass in the Farm Belt, to the blues in the Mississippi Delta.

Of course, the Mississippi has also been fertile ground for musical theatre.

The river is the setting for Show Boat, based on the novel by Edna Ferber, with music by Jerome Kern and lyrics by Oscar Hammerstein. Show Boat opened on Broadway in 1927 and ran for 527 performances, closing in 1929. Like Huckleberry Finn, Show Boat has also been controversial for its depiction of African-American characters, as well as for some of its lyrics. In recent revivals, those lyrics have sometimes been altered to be less offensive.

The musical version of Huckleberry Finn, Big River, opened on Broadway in 1985 and ran for 1,005 performances. It won seven Tony awards, including Best Musical and Best Score, for composer Roger Miller. A new production of Big River opens Sept. 26 at the Goodspeed Opera House in East Haddam, Conn., and runs through Nov. 30.

As Hurricane Gustav bears down on New Orleans and the Gulf Coast, I can't help but think about the river's potential for destruction. My thoughts are certainly with people there. But I also know that the Mississippi has been a powerful cultural force in American history, and I'm looking forward to seeing where it all begins.
Posted by Esther at 8:33 PM

Why are you headed out to Minneapolis?

Unfortunately, Minneapolis/St. Paul is not the most exciting place to see the river. It's split into a lot of little rivers there, some of them looking more like streams. By the time you get to the southern tip of Wisconsin (where it meets Iowa and Illinois), it's pretty large, though nowhere near as large as in LA. In Wisconsin, we used to live about 20 mins away from the Mississippi, and between that and traveling back and forth between TX and SC as a kid every year, I've seen the river more times than I can count. On the other hand, I've never been further west than El Paso.

I'm going to visit friends and see the new musical "Little House on the Prairie," both of which I'm very excited about. Seeing the Mississippi is a side benefit. Hopefully someday I'll get to see more of it, but hey, you've gotta start somewhere - so why not close to the beginning! ;-)

Well either way, Minneapolis/St. Paul is a beautiful city. I really felt like I was "home" when we went there. I've rarely felt so comfortable elsewhere.